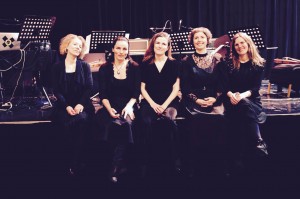 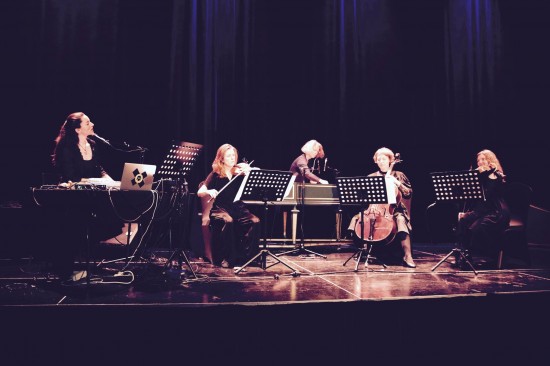 2019 saw the premiere of a new collaboration between Maja S. K. Ratkje and Icelandic award winning ensemble Nordic Affect. ‘Rökkur’, the Icelandic word for twilight, originates in a workshop between performing composer Ratkje and the ensemble and is set to reveal shades of various noise and timbre, where Maja blends her own extended vocals with the sound of the acoustic baroque timbers of Nordic Affect, everything treated and blended in real-time by the cyborgic electronic extensions of Ratkjes live-instrument.

Rökkur was premiered at Dark Music Days in Reykjavik February 1st 2019 in Gamla Bíó, and the concert was recorded.

…The first opened with an introduction that from anyone else i might have called tentative (nothing Ratkje ever does is tentative), a quietly demonstrative collection of lower-case squeaks, scrapes, scratches, thuds, clunks and tinkles set within a highly reverberant soundspace. This bewitchingly established the atmosphere for a remarkable sequence that followed: Ratkje sporadically enunciating words while the ensemble offered pizzicati and swishes from the strings and occasional trills and twiddles on the harpsichord. That description in no way lives up what it evoked: a spellcasting recitation, the ensemble’s actions an integral part of the conjuring. What emerged into the space brought to mind something of the aesthetic of director Panos Cosmatos, a mixture of high gothic and mysticism seemingly coloured deep crimson, Ratkje vocalising over networks of shivering pitch bands, receding to high violin whistles and harmonics, like streaks of incense blown horizontal by the wind. Eventually, a ghostly apparition manifested in the form of askew, quasi-Baroque counterpoint, culminating in a setting of George Herbert’s ‘Love bade me welcome’.

Where the first part had been ritualistic and solemn, the second part was more expressively free, not directed towards a specific intent or purpose but unfettered, capable of spontaneous exuberance. For a time the music became transfixed in an irregular cycling chord sequence, as if dancing on the spot, until everything became subsumed in electronic turbulence that continued to grow and coalesce. Though unsettling in the wake of what had preceded it, it nonetheless came to feel completely glorious, like some form of elemental entity arising out of the earth (in response to the spellcasting?), emitting black radiance. It was literally overwhelming, Ratkje’s voice growling and cracking, the music made both childlike and sinister through a simple cowbell. Clarifying into a drone with a granular surface, this acted as a trigger for the ensemble, causing the electronics to vanish. As the dark magic faded, it was replaced with faint instrumental actions, fragile figments of half-lost and -forgotten ideas or memories. Ratkje suddenly injected a huge amount of vocal energy, briefly leading to final burst of momentum and density, but this too faded, the ensemble concluding Rökkur with an instrumental reprise of the George Herbert song, the melody line doubled by Ratkje with the most genuinely uncanny, theremin-like whistling.

This was music-making of staggering brilliance and imagination, made all the more emotionally vivid and authentic due to the performers evidently being quite relaxed and the music having a slightly rough around the edges quality. At the end, i didn’t want to leave the Gamla Bíó, i wanted to stay and bask in its afterglow, savouring the dying embers and echoes of the magic that had been made.