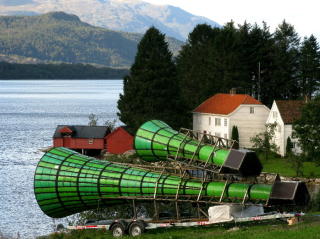 The Worlds Largest Mobile Horn Loudspeaker Sound system Desibel, a mobile sound art project, commissioned by Vevringutstillinga in 2009 for their 30 years anniversary. At its first performance, the loudspeaker horn pointed towards the mountains on the opposite side of the fjord. The sound echoed around in the fjord landscape – the whole landscape answered, it was heard in places far away!

Desibel was also made as a protest against the plans of a major mining project in Vevring, a quiet village situated in the district of Sunnfjord. The concession is owned by Nordic Mining. The mining will cause 200 000 000 cubic meters of contaminated waste to be dumped every year into a valuable national salmon fjord. Only four percent of the mountain will be used in various commercial interests. The mining will go on for 24 hours a day, 7 days a week for 30 years. Desibel is a protest against ruthless exploitation of natural resources and against short time profit thinking.

It plays a ten-minute long composition written by Maja S. K. Ratkje. The composition is made based on frequency analysis of the horns, and the pitches are chosen to give the horns a full volume range. The main sound source is trombone, a sound that one can associate with due to its shape. The trombone is sampled and pitched and layered in large chords, sometimes treated with noise effects, but most of the time as it is. The sound of seagulls is also present – an absurd, over-sized response to the mining company’s promise that the mining work will only be as loud as the seagulls.

Desibel was awarded an ‘honorary mention’ at Prix Ars Electronica 2010, in the category ‘digital music’.

Check this out too!: