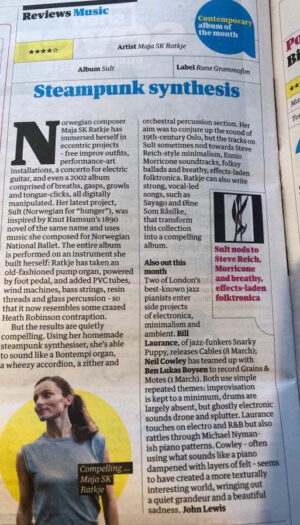 The Guardian: ‘Contemporary album of the month’.

Norwegian composer Maja SK Ratkje has immersed herself in various eccentric projects over the years – free improv outfits, performance art installations, a concerto for electric guitar, and even a 2002 album entirely comprised of breaths, gasps, squeaks, grunts, growls and tongue clicks that had been digitally manipulated. Her latest project Sult (Norwegian for “hunger”) was inspired by Knut Hamsun’s 1890 novel of the same name and uses music that she initially composed for a Norwegian National Ballet production. To add a further layer of complexity, the entire album is performed on an instrument that she built herself: Ratkje has taken an old-fashioned pump organ, powered by foot pedals, and added PVC tubes, wind machines, bass strings, resin threads and glass percussion – to the point that it now resembles some crazed Heath Robinson contraption.

But the results are quietly compelling. Using her homemade steampunk synthesiser, she’s able to sound like a Bontempi organ, a wheezy accordion, a zither and orchestral percussion section. Her aim was to conjure up the sound of 19th-century Oslo, but the tracks on Sult sometimes nod towards Steve Reich-style organ minimalism, Ennio Morricone soundtracks, folksy ballads and breathy, effects-laden folktronica. Ratkje can also write strong, vocal-led songs, such as Sayago and Øine Som Råsilke, that transform this collection into a compelling album. (John Lewis)

(…)Midway through the stark novel, the writer wanders by an organ grinder and his daughter singing “a mournful song” which, in his malnourished condition, affects him profoundly: “I felt drawn to the notes, dissolved in them, I began to flow out into the air… high over mountains, dancing on in waves over brilliant areas…” And this is as good as any description for the effect Ratkje’s compositions achieve here. Unlike her fiercely experimental voice improvisations, large scale orchestral work or sound art installations, Sult has beguiling folk-like songs touched with a transcendental air. It reflects the starving artist’s hyper-sensitive state that sees him experience not only abject poverty but also heights of joy.

But, Ratkje’s experimental sensibilities clearly run through Sult, seeing her heavily modify her accompanying organ, transforming its repertoire with plastic and metal tubes, guitar strings, resin thread and a wind machine. Like an acoustic form of glitch, the mechanism’s malfunctions, squeaks and rattles are emphasised in the arrangements to lend uncanny, dilapidated rhythms and textures to the affecting, sensitive suite. In doing so Ratkje has produced a rare recording that balances beautiful, uncanny song, rich, acoustic composition and startling originality in equal measure. (Listening With Uncertainty: Rum Music With Russell Cuzner)

By the musician’s own self-created standards, via projects including noise duo Fe-mail and the improv-based Spunk, these compositions feel objectively palatable: existing at the fringes of pop-song structure, sure, but there are euphoric vocal refrains that serve as hooks, and playful organ melodies, threaded through pieces such as ‘Et hvitt fyrtårn midt i et grumset menneskehav hvor vrak fløt om’. In the same way high street evangelists are allowed to bellow at the public while someone standing outside New Look gargling death metal lyrics would be moved on, you wonder if the moments of atonal thud and junked cacophony on Sult feel implicitly acceptable because we know they were created as a ballet soundtrack. Maybe it even induced mild shock in the Oslo auditorium. Most importantly for this review, it thrives without its original visual stimulus. (Noel Gardner)

Maja S.K. Ratkje’s spellbinding ‘Sult’ is based on her soundtrack for the ballet suite by Jo Strømgren for the Norwegian national ballet. Leading on from her previous solo LP ‘Crepuscular Hour’, Ratkje is here accompanied by a wildly modified, out-of-tune pump organ in 9 wonderous songs that attest to her non pareil, improvisational brilliance.

Stemming from the ballet adaptation of Sult, Knut Hamsen’s classic novel about a starving writer in late 19th century Kristiania (now Oslo), Maja’s treatment closely follows its themes in the lyrics and music, but works as a distinctive document in its own right. Under song titles taken from the novel, Maja unfurls surreal, anachronistic scenes akin to a steampunk echo of olde Oslo.

Using an era-appropriate pump organ rigged with metal and PVC tubes, and a wind machine built in, along with resin threads, metal and glass percussion and bow – which she had to learn to play before recording – Maja regales the narration with a fine but beautifully loose grasp of her instrument’s chaotic analog nature, skilfully harmonising with her own, incredible vocal abilities.

Despite having never read the book or visited Oslo, Maja’s music and singing takes us right there, to the same cold cobbled streets where Hamsen wrote his semi-autobiographical account of a starving artist trying to make it, and where you might encounter images that gave rise to Edvard Munch’s ’Skrik’ [1893]. Through the resilience of her voice and the queasy, off-kilter shanty feel of the pump organ, Maja most romantically and acutely connotes that atmosphere with the timeless charm of a bard, troubadour or dramaturgist, or quite simply the ambiguous, dreamy nature of the most potent art.

(…)Ratkje allows herself time and space to feel the limits of her new, unique instrument, and to capitalise on the opportunity for sonic invention through unfamiliarity.(…) “En Træflis Å Tygge på” is an abstract street scene, approximating the surprising harmony of a street musician, a whistling passerby, and the rattling of chains and crunching of papers underfoot. These abstract, atonal interludes interact with mournful chamber songs such as “Øine Som Råsilke, Armer Av Rav” – a mirror of the erratic and nonlinear depiction of varying states of madness described in the novel. Reflecting on the initial performances of Sult, Ratkje stated her intention for “the music to be ugly and tender and rough and fragile at the same time”. Her audacious, adaptable voice and Frankenstein’s monster of an instrument are well-suited to this contradictory reflection of the complex, damaged human psyche. (Claire Biddles)

Maja Ratkje’s list of previous collaborators is as long and impressive as her catalogue of previous releases, but the Norwegian musician and composer’s latest album, ‘Sult’, is possibly her strangest yet. Based around the haunting drone of a pump organ, these nine tracks are like the drawn-out respirations of some atonal beast. Begin with ‘Den sprættende bevegelse min fot gjør hver gang pulsen slar` to hear the power of her compositions in full force.

The novel follows its protagonist, a writer, through a difficult time as he roams the streets, keenly attuned to his dismal station in life. The book’s title is literal here. Ratkje—who’s recorded with jazzworld figures, as well as experimentalist Ikue Mori—uses the discordant feel of aimlessness and surreptitious creativity to inform the pump organ she plays across nine tracks, occasionally intoning some wordless, emotive sentiments. There’s a bit of good whistling, too. While Sult, the novel, has been canonized, described as the opening salvo of 20th-century literature and ranks as an early work by a pretty significant novelist, there likely was another piece of writing to draw from, something not tainted by barbarity. But maybe it’s the haunting and eerie pastiche of history, sound and stage that makes Ratkje’s recording worthy of note.

Pumped up toe-dancer from Norway’s avant-garde Norwegian composer Maja S K Ratkje’s dreamlike music for a ballet based on Knut Hamsun’s psychologically-charged modernist novel, Hunger, is something of a departure from those pricklier designs for which she is more generally known. A cavalcade of lamenting coos and sighs combine with more theatrical hollers, all redolent of the extended vocalisations of Meredith Monk and Joan La Barbara, as Ratkje accompanies herself on a modified out-of-tune pump organ. A fantastical and hallucinatory ambience permeates throughout, Ratkje evoking both the dark and dusty streets of 19th-century Kristiania (now Oslo) and the episodes of irrational bliss experienced by Hamsun’s protagonist.4/5.

Norway’s Maja S. K. Ratkje has built a formidable reputation for vocal and electronic experimentation. Despite that pedigree, this is a performer who can still find room to challenge her compositional methods, and this latest release for Rune Grammfon is case in point.

Accompanying a Norwegian National Ballet realisation of Knut Hamsun’s 1890 novel Sult, to compose the score Ratkje ditched her electronics and employed a broken pump organ subjected to all sorts of Cageian preparations. The output takes the form of curious, and occasionally unsettling, drones and tones, over which Ratkje threads her distinctive voice, itself ranging from quiet murmuring to powerful rapture.

The result is a suite of nine intense pieces that have the power and breadth to utterly displace you. The urgent note clusters and noisy cycles that open a track like ‘et hvitt fyrtårn midt i et grumset menneskehav hvor vrak fløt om’ (roughly translating as ‘a white lighthouse in a muddy sea of humans where wrecks floated about’) will either quicken your pulse with restless energy or cause massive panic depending on the way you approach it. Closing track ‘Kristiania’ is perhaps the most fragile, unadorned moment here, containing a wistfulness that disguises a turbulent, volatile centre. (Mat Smith)

This entry was posted in Blog, Sult. Bookmark the permalink.