Let’s Put It To Music: 20 Years Of Rune Grammofon 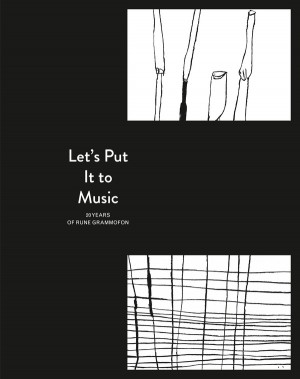 Rune Grammofon: “It´s no secret that Rune Grammofon founder Rune Kristoffersen is a big admirer of labels like Blue Note, Impuls, ECM, 4AD and Factory, to mention some labels with strong visual identities. But we can´t recall another label that has worked with one designer exclusively for 20 years and 200 releases. The exclusivity was a premise for our collaboration with Kim Hiorthøy from the very beginning, but we certainly never had any expectations about how long we would be able to keep it going. This book is far from being a catalog lining up the releases (it´s not even “complete” or chronological in that sense), but provides an interesting insight by including sketches, rejected designs and unused idéas that never left the drawing board… until now. A Rune Grammofon record is never finished until the cover is done and a sleeve is never designed for the sole purpose of selling a product (it took 28 releases before an artist was pictured on the sleeve!), or necessarily reflect the music in any way (is that even possible?), but rather to establish a suggestive relation between the two, often based on the album title or a song title, but not in an obvious way. We have also included a number of interesting and eclectic “best of” lists from the likes of Jono El Grande, Bent Sæther, Lasse Marhaug, Mats Gustafsson, SPUNK, Rune Kristoffersen and others.”

The book has 224 pages, comes with a tactile Geltex hardcover and is beautifully designed by Hiorthøy.

Includes a 7″ single with exclusive tracks from Fire! Orchestra, The Last Hurrah!! and Maja S. K. Ratkje (a pre-version of a track from the upcoming Sult album), surely among the most exuisite in the whole catalogue.

One Response to Let’s Put It To Music: 20 Years Of Rune Grammofon