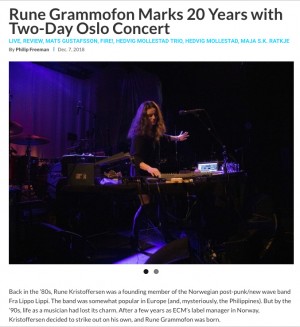 Jazzwise: “The venue, Nasjonal Jazzscene, is an unusually atmospheric, decade-old national jazz club, originally built as a cinema in 1913. With only an alcoved curtain screening it from Friday-night Oslo, misdirected drunks make a fist-flying exit, outraged at Maja Ratkje. A versatile composer and provocative performer, her witchy susurrations in inky dark suggest a feminist demon persona, confirmed when her mouth yawns in a cavernous growl, and she commands her Theremin’s wolf-howl oscillations with wizardly waves. The unpleasant crackle of plastic-wrap on her mic then contrasts with frail folk singing about industrial cruelty: “Can’t you feel the dust in your lungs?” Another lyric was used on Rune’s 10th anniversary: “Money ruins everything.”” (Nick Hasted)

Downbeat: “Ratkje took the stage and nestled into a kind of fortress of equipment, surrounding herself with multiple keyboards, a laptop, a theremin and a microphone. As a solo act, she performs improvised vocal music, as well as complex electronic noise; she also composes for ensembles as large as a full orchestra. Her 45-minute set here encompassed electronic zaps and shrieks, wild ululations, delicate waves of sound from the theremin and a surprising passage of sound art, as she crumpled a huge sheet of plastic wrap into the microphone. But Ratkje brought it all back down to earth at the conclusion of her set with a sorrowful rendition of the traditional song “Mining For Gold” (the best-known version of the tune likely being a version from the Cowboy Junkies’ 1988 The Trinity Session).” (Philip Freeman)