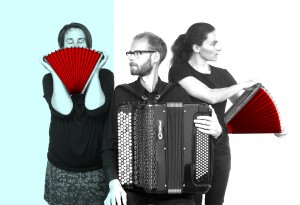 “Aeolian”, definition: relating to or arising from the action of the wind.

Aeolian draws its inspiration and title from the “breath” of the accordion. Ratkje and Hinde have collaborated closely on creating a hybrid piece where newly invented aeolian instruments are fully integrated within an acoustic ensemble. Accordion soloist Andreas Borregaard, is at the centre of the work both physically and musically. The air-activated instruments are mechanically activated by the musicians during the piece, blending the sounds of the installation with the musicians’ conventional instruments in a composed, breathing entirety.Commissioned by Red Note Ensemble. Premiered at Huddersfield Contemporary Music Festival 2017.The artists involved won a Scottish Award for New Music in the category ‘collaboration’ for this work.

“(…)Thank goodness, Maja S K Ratkje and Kathy Hinde were on hand to salvage the evening, bringing the day to an end in Bates Mill Photographic Studio with Red Note Ensemble’s performance of their installation piece Aeolian. Initially, i sat at the side of the space and just listened, content not to be simply and superficially drawn to its visual aspects. But it worked magic: never have i seen and heard such a kaleidoscopic panoply of bizarre and exotic musical instruments used in a way that cancels out completely the idea of novelty. This was so true that i found myself looking at the ‘regular’ instruments – accordion, flute, cello and so on – and wondering what the fundamental difference was between these and the home-made gadgets and gizmos surrounding them. In Aeolian, there really is no difference between them, all united in the most beautiful, exquisitely-designed and executed ballet of action and sound, like a tender exquisite lullaby, perfect before heading off to bed.” -5against4.com 2017

“(…)But the work that most perfectly combined seriousness of purpose with playful delivery – and which also continued sound’s celebrations of women creators – was Aeolian by British installation artist Kathy Hinde and Norwegian composer Maja Ratkje, another Scottish premiere. With bizarre air-driven contraptions – bellows, fans, snaking tubes and expanding concertinas – nestling in among an expanded 13-piece Red Note group (who themselves surrounded Danish accordion maestro Andreas Borregaard), Aeolian was an exquisite examination of sound, music, breath and air, as lyrical and playful as it was rigorous and uncompromising, and utterly bewitching from start to finish.” -David Kettle, The Scotsman 29 Oct 2018

This entry was posted in Blog, Chamber music, Multimedia/Installations and tagged accordion, sinfonietta. Bookmark the permalink.