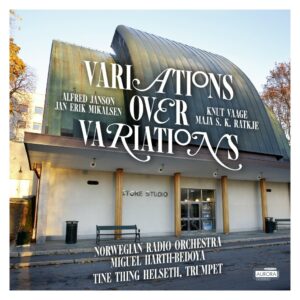 The four works enters into a dialogue with existing music and a music history that binds them together, in very different ways. Some places musical quotes open up a door to the Norwegian, other places it re-contextualises the idea of a national music. Soloist star trumpeter Tine Thing Helseth is featured on the title track in Janson’s trumpet concerto ‘Variations over variations on a Norwegian folk tune’, a variation over Edvard Grieg’s ‘Ballad in G minor’. Ratkje’s ‘Paragraf 112’ expands the orchestra’s ordinary timbre and establishes a vulnerable openness which later turns darker and more dangerous. Mikalsen’s folk-inspired ‘Songr’ moves between grand orchestral roars and fragile chords, while Vaage’s ‘Mylder’ could be described as a symphonic internet where the surface seems strangely familiar.

This entry was posted in Recorded compositions. Bookmark the permalink.