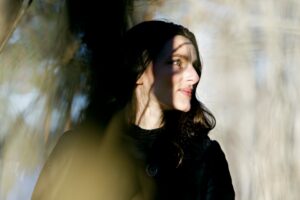 By positioning the musicians at the perimeter and the audience at the centre, Crepuscular Hour becomes an act of materialisation. Instead of bursting outward and dispelling into the open air, sound funnels inward and solidifies – guitars react effervescently with waves of choir, while organs meld with flumes of brass and electronic noise. At certain moments, the resultant cacophony deafens its own points of origin, becoming an independent entity with no beginning and no end; a sphere of sound both miraculous and horrible, reacting and congealing with itself over and over, liberated from the control of its instigators. To be stranded within this recording is overwhelming enough. What must it have felt like to be stood at the centre of Huddersfield Town Hall on 20th November 2012, drowned within the immensity of Crepuscular Hour in real time?

I’m hearing the clamour of worldly creation. Divine energy gushing in from the edges. “Crepuscular Rays” are those beams of sunlight that stream through the gaps in the clouds; the sudden visibility of an omnipresent life source, whose sheer scale usually evades the blinkered apparatus of human perception. Coupled with Ratkje’s composition narrative – the creation of the world and human beings at the hands of a female divinity – Crepuscular Hour becomes an epiphany on the inherent turmoil of a universe I usually perceive as existing in harmonious equilibrium; the secret history of solid objects as products of flame and celestial instigation, skies hauled into place by godly hands, mountains shunted forcefully upward out of the earth. I’m enamoured by the way in which the choral voices interact; dissonances thicken until I no longer hear them as clashes in pitch, but as monolithic howls of solidified breath devoid of musicality altogether. I stop hearing the distinctions between texture – between French horn and guitar, or saxophone and chanted verse – as the gigantic hall acoustics force them into compounds.

The composition traces an arc of recurrent rise and fall. Volume levels reach toward climactic peaks and then drop off suddenly, with fresh air rushing into the space where vibration used to be. Briefly I’m able to perceive melodic strands and distinct musical shapes, liberated from the obfuscation of excess, before the process of materialisation begins all over again. With the introduction of the organ in the final 15 minutes – a monolithic smear of notes that floods into the centre of the frame – Crepuscular Hour begins its ascent toward absolute crescendo. Voices scream “HEAR!” in shrill and terrifying unison, spiralling like water in an unplugged basin, howling beneath the glimmer of distortion and guttural drone. The piece stops feeling like the act of creation and becomes the implosive assassination of silence; the irreparable destruction of purity, embedding the forces of turbulence and disarray into the fibres of body and place.