5:4 reviews In Dialogue with Rudnik, live at HCMF 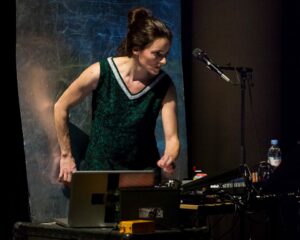 Maja Ratkje’s interpretation of various recordings by Polish composer Eugeniusz Rudnik—fittingly titled In Dialogue with Eugeniusz Rudnik—was decidedly non-linear. An audible descent took us into a dream-like place where sounds and ideas float, swirl, coalesce, swoop, soar and plummet. Bells, vocal sounds, electronic blurps and a thundersheet were transformed way beyond their origins, often coming out of nowhere yet instantly making perfect sense as they were woven in and around Rudnik’s materials. And the music’s phantasmagorical nature extended to its structure; a corresponding ascent, with sounds similar to those at the start, indicated a conclusion—but instead expanded into a lengthy section that swelled until it engulfed the space, her voice becoming a vast chorus. It was a typically spectacular performance, carefully controlled and organised yet with an exciting seat-of-the-pants execution from Ratkje.

Simon Cummings, 2015
This entry was posted in Blog, Other concerts. Bookmark the permalink.