10 best albums of 2015 at WFMU: “showcasing a sensitivity, attention to detail and unadulterated beauty that ultimately feels like a cathartic letting-go.”

Both fertile and reverential, the sounds the players sent out into this tomb become anointed with particularly long and rich reverb trails that float, linger and layer in the space. For the first two pieces Maja Ratkje’s cool, controlled voice is born aloft on gentle suspensions from Wesseltoft’s accordion, organ and harmonium, Norment’s glass armonica and Galåen’s zither, instruments seemingly chosen for their sumptuous long tones. The confluence of their extending chords resonate and writhe to remind of some of the Indian raga-inspired works of the West Coast’s Terry Riley, Henry Flynt and particularly the more recent performances from Catherine Christer Hennix, also released by Important Records.

The last half of of the disk is taken up by the half-hour piece, ‘Afterglow’, in one simple word perfectly describing the magical effect the venue had on the sounds. Distorting perceptions of time, the lengthy, droning tones go beyond their hitherto mysterious, cool charm to become unnervingly fervent, while Ratkje sounds at her most possessed to conclude an astonishing, transformative work that manages to be both foreboding and joyful.

I am not particularly familiar with any of the four artists involved in this unexpectedly audacious and unique album, but Celadon is definitely a kindred spirit to Important’s previous iconoclastic, raga-influenced drone epics by Catherine Christer Hennix. Charlemagne Palestine is yet another artist that unavoidably springs to mind, but favorably so: while this album is anything but derivative, Maja Ratkje and her collaborators share his willingness to take drone music into some very dissonant, uncategorizable, and cathartic territory. Put more bluntly: Celadon is probably not for the average drone fan, as Ratkje’s vocals gradually build to an almost demonic, window-rattling intensity, but it is nevertheless a bold, striking, and deceptively ferocious artistic statement that is like absolutely nothing else that I have heard. 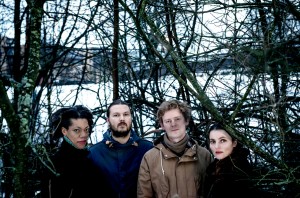 There are a number of curious elements to Celadon and not all of them have ready explanations. For one, I have no idea how these four musicians are interconnected or how they all wound up together recording an album in this vein this amidst the fabled acoustics of Norway’s Emanuel Vigeland Mausoleum. Yet another idiosyncrasy is the unusual choice of instrumentation, particularly Camille Norment’s glass armonica, which I do not think I have ever heard so prominently on an album before (if ever). Consisting of a series of glass bowls or goblets played with finger friction, Norment’s armonica provides a haunting, hazy, and eerie backdrop throughout Celadon. In fact, the opening “Beneath the Bough” largely feels like a stark duet between just the bleary shimmer of rubbed glass and Ratkje’s chant-like, quasi-ritualistic vocals. Wesseltoft and Galåen admittedly contribute some gently buzzing textures via harmonium and zither, but their presence does not truly come to the fore until the following “The Green Flood.”

Initially, the lengthier “The Green Flood” just feels like more of the same, but as it progresses, it becomes clear that the album is slowly building into something considerably more daring and ambitious than its opening suggested. The transformation is far from forced though: Celadon is primarily a languorously swaying reverie for much of its duration, keeping the music extremely minimal and spacious and allowing its darker underbelly to only surface slowly and organically through subtly massing islands of dissonance. By its halfway point, however, it is clear that “Flood” has sneakily become quite heavy, cohering into a dense miasma of uneasily harmonizing harmonium drones while Ratkje’s previously sedate vocals occasionally break into clear, banshee-like wails. Initially, her trips into the upper registers maintain an operatic level of control and force, adding a welcome power and unpredictability to the piece. On the final piece, however, the remaining thin veneer of mannered artifice is gutsily torn down, transforming those same soaring and angelic vocal crescendos into something positively feral-sounding.

“Afterglow” is initially quite similar to its predecessors, however, despite being a bit darker and more ominous right out of the gate. That said, no amount of uneasily harmonizing drone thrum could have possibly prepared me for Maja’s blood-chilling howl that occurs around the six-minute mark. From that point on, Celadon has far transcended its somewhat subdued and humble origins for good and we are in uncharted territory to stay. Wisely, the vocals pyrotechnics do not continue unbroken, but any sense of calm is decisively shattered: while the quartet intermittently fade back into a smoldering equilibrium, there is always the threat that Ratkje will again erupt into something resembling a shrieking exorcism or menacingly low-register Tuvan throat-singing. Such a performance would probably give me an instant headache in most other hands, but it does not here: the visceral explosiveness of Ratkje’s vocals is certainly startling, extreme, and intense, but it feels more like a tour de force performance by an insanely gifted performer rather than a more modest talent pushing herself beyond her capabilities with reckless abandon. Also, it not only fits the surrounding music, it elevates it into something rather amazing and otherworldly.

If Celadon has any flaws, they are definitely minor ones–mainly that it gets off to a fairly slow start and takes a long time to distinguish itself as a radical departure from more traditional drone. Those somewhat meandering, improvisatory traits ultimately work in its favor though, making the explosive crescendo that much more stunning and satisfying. Obviously, Maja Ratkje’s almost-supernatural performance deserves a huge amount of credit for making this such a wonderful album, but the entire ensemble worked beautifully together. While I was personally most enamored of Norment’s glass armonica, all four musicians seamlessly cohered to form an egoless and dynamically simmering backdrop without a single misstep or false-move. This is a genuinely prodigious achievement. I have absolutely no idea what I would even call this genre (Outsider drone? Pandit Pran Nath-damaged minimalism?), but I am certain that Celadon has decisively earned a place within its pantheon of classics.

Celadon by MAJA S.K. RATKJE, JON WESSELTOFT, CAMILLE NORMENT, PER GISLE GALÅEN will definitely be appearing on my 2015 list. Maja S.K. Ratkje’s vocal on this is nothing short of genius. Celadon is a recording of transcendental, mediumistic power.

According to the record label, Celadon was “Recorded in Norwegian sculptor and painter Emanuel Vigeland’ s (1875 -1948) mausoleum in Oslo in 2013. A recording space that is famous for its acoustics and its long and full-sounding reverb. These three tracks utilize both the delicacy and the power of acoustic instruments and human voice in relation to the unique recording space”.

There’s a lot to like here – Celadon is beautifully recorded, the compositions wear their complexity lightly, sometimes the timbre seems ancient and Eastern, sometimes it seems like right now (or 2013 in a mausoleum in Oslo, at least). The vibe of invigorating displacement you get from listening to this isn’t unlike the one you get when you visit Neolithic burial mounds. About 21 minutes and 55 seconds into the final track Afterglow, something genuinely special starts to happen. Listen to it and see (hear, feel) for yourself.

Celadon is chameleonic, sinuous and sinewy, teeming with drones that glisten like fresh spiderwebs at daybreak. Cut in the mausoleum of the late Norwegian sculptor and painter Emanuel Vigeland, it’s that most unusual of quartet LPs: the players sacrificing their respective individuality in service of a whole that feels telepathic. Reverberating rivulets of harmonium, bells, organ, and other instruments stream together to form a holistic stew that is by turns glassine (“Beneath the Bough”), broiling (“The Green Flood”), and regally outre (“Afterglow”). The ideal hostess for this avant-garde soiree, Maja S.K. Ratkje comports her voice to accentuate Celadon’s shifting intensities, her sharp ululations mimicking the massed sine waves or operatically surfing them. — R.C.

This entry was posted in Blog, Celadon. Bookmark the permalink.