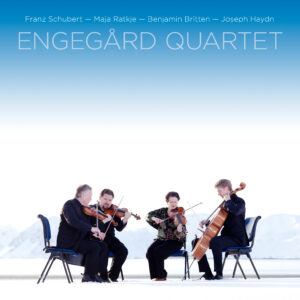 2L: “Perhaps the greatest single characteristic of Franz Schubert’s Rosamunde Quartet (1823) is the elusive, longing and perhaps even tragically unconsummated atmosphere that pervades the entire work. Only in the Andante are we really allowed to relax in its peaceful serenity.

The ambiguity in the title of Maja Ratkje’s Tale of Lead and Light (2011) reflects the dread which pervaded Oslo in the summer of 2011, and the life-affirming light of Beethoven’s opus 59/1 which inspired Maja’s work.

It is a tribute to Benjamin Britten’s inherent “joie de vivre” that optimism and love triumph in his Second String Quartet (1945), composed just after the 2nd World War. The quartet reaches its emotional climax in the magnificent Chacony, a passacaglia with no less than 21 variations, inspired by Henry Purcell. Britten’s 2nd string quartet received its premiere on the 21st November 1945, 250 years to the day after Henry Purcell’s death.

Recording Joseph Haydn’s Op. 76 No. 5 on our debut CD in 2008 inspired us to include the complete opus, arguably Haydn’s greatest string quartet collection, in our repertoire as soon as possible. The heart of the Emperor Quartet, Opus 76/3 is also the most well known movement, Poco adagio. Haydn composed the psalm that he subsequently used as the theme of this movement after a prolonged stay in England. Something of a celebrity, Haydn mingled with the royals, and his admiration for the British national anthem inspired him to compose a tribute to Emperor Francis II. It was later used first as the Austrian and then as the German national anthem. Haydn used a musical cryptogram of the first line of the Anthem, “Gott erhalte Franz den Kaiser” to create the opening theme of the first movement, using the first letters of each word in the German text. g e f d k/c, are the exact musical notes of the main theme in the Allegro. The simplest ideas are often the best!”

This entry was posted in Blog, Compilations, Recorded compositions. Bookmark the permalink.