In Dialogue with Rudnik reviewed by Vital Weekly 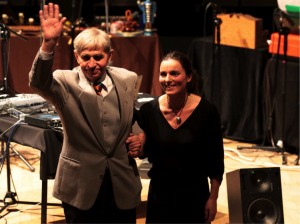 Vital Weekly: There are two of his pieces on this CD, some twenty minutes in total, and in the middle a thirty-minute piece by Ratkje. The pairing of these two has to do with the fact they both use a lot of voice material in their music and it’s Ratkje paying homage to the work of Rudnik. In the first piece by him it’s perhaps not that obvious to hear it’s based on voice material, even it’s part of it. It could, perhaps, be any kind of fine electro-acoustic treatment of voice material as well as perhaps something else. ‘Divertimento’ (1971) is a great piece, one from the canon of modern electronic music. It’s not easy to say why, but within these ten minutes there is a lot of slowed down voice, repetition and wackiness: it’s perhaps a fun piece. In Rudnik’s other piece, ‘Breakfast On The Grass In The Cave of Lascaux’, from 2002, there is more slowed down voice, but with an updated technology, it sounds also a bit like rehash of ‘Divertimento’, but seems to be missing the same playfulness. It’s not a bad piece at all, but perhaps a bit too serious in comparison. Ratkje’s piece combines more things: her voice, field recordings and electronics. Her piece has also some nice playful elements, owing to the world of improvised music perhaps more than Rudnik’s pieces, and is more distributed over the thirty minutes her piece lasts. There is a fine element of ‘roughness’ here, like dictaphone abuse and other lo-fi sounds, making this excursion a nicely bumpy ride at times, but also quiet when needed. Great one.

Just outside: (…)There’s also a tinge of humor in play, often not a bad thing in this genre. Both of his works have a fine flow and, while clearly from the )classical) electroacoustic lineage, are anything but sterile. Ratkje’s’s construction consists largely of vocal samples from children singing to rocket countdowns with a lot in between. It’s rather dense and intense, ricocheting along in spurts on concentrated activity, the vocals usually distorted, oven overlaid on one another. Periods of relative respite emerge, here with ghostly but comforting, blurred piano chords, there with oddly mechanical bird sounds. There’s more a hyper-humid, industrial jungle effect here; Blade Runner vs. 2001. All three pieces are fine and represent the upside of this hitherto mostly unknown (by me) landscape. Recommended.

Album link
This entry was posted in Blog, In Dialogue with Rudnik. Bookmark the permalink.