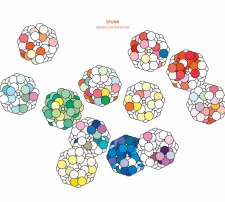 Rune Grammofon: “On in this botanical adventure – or “Adventura Botanica” – SPUNK join forces with one of Norway’s leading modern dance exponents, Odd Johan Fritzøe, to create a sound and movement work celebrating Darwin’s legendary, game-changing voyage to Madagascar. Premiered in 2013 at Oslo’s trailblazing Ultima Festival of Contemporary Music, “Adventura Botanica” was the third collaboration between SPUNK and leading choreographer/dancer Odd Johan Fritzøe. SPUNK recorded the music on this album in a studio setting around the same time, as a document of the project, but its lush and ever mutating jungle of sounds give a vivid sense of dynamic movement and fertile imaginations as the four musicians extend their sonic probosces into the rich receptacle of the dance amphitheatre.”