In Dialogue with Rudnik

The piece can be realised live as well, here is from a concert in Oslo 2014:

Making music is to be in constant dialogue with your own aesthetics and preferences. In inspired moments, you can get surprised by where the process leads you. And in welcoming circumstances, there are no limits or sneaking doubts that disallow you to try out any possibility. The electronic music made by Eugeniusz Rudnik unquestionably encourages such a position. Working with his music has been greatly inspiring, and the nature of his music feels strangely fitting to my own approach to electronic media.

I have heard someone philosophise over Rudnik’s musical style now being trendy in popular means of electronic composition, where one blends noisy “lo-fi” elements with more sophisticated treatments. You can hear so-called unwanted sounds, like breath, clicks or noisy field recordings becoming a part of the music. This was not the main tendency in the whole era of acousmatic composition – over the last three decades before the millennium. However, it is not wrong to say that we can trace a similar attitude in the first awakening of ‘music concrète’, originally describing music derived from recordings of everyday sounds. The idea that any sound at all is as good as sounds produced by a conventional instrument, is also of course a product of the futurist movement, as stated in Luigi Russolo’s famous manifesto The Art of Noises (1913).

Eugeniusz Rudnik seems to embrace such an attitude naturally; a sheer surplus of creativity guiding his compositions. He seems to avoid all conventional manners of (and perhaps also manners in) making music and chooses whatever he finds interesting in order to make new and surprising constellations with any device at all, almost recklessly, I find.

There is a clear link to the act of improvisation in his music, where you can feel the tension in every moment of possible action. Rudnik avoids predictable forms as well as “pedagogical” patterns in his music. I have a suspicion that he has fun when he creates music, and that he simply chooses what he likes. An obvious fact, of course, but his life-long originality proves it.

Another observation is that he is not afraid of working intuitively, even with material demanding a great amount of work, time and technical skill to carry through. The music has to run its course.

When asked to compose music based upon some of Rudnik’s classic works, I was thrilled to hear his non-idiomatic use of field recordings and voices. I have worked with such sounds since I first started to create my own electronic pieces. And the always changing arsenal of concrete sounds that I carry along when I improvise live in concerts has many similar qualities to the musical world of Rudnik. I thought this task could go well.

The first step was to create a 40-minute live version of the piece, performed at the main concert hall of the Polish Radio in Warsaw on December 5, 2013. The next step is what you hear on this record, a new work consisting of samples from Rudnik’s production, more or less electronically treated, then added to a musical form consisting of sounds from my own production as well as newly recorded material.

One intention was to retain the playful quality that I find in Rudnik’s music, something I tend to explore more vividly in a live setting than on a record. Another was to make bridges between his and my sound world, which meant that I had to alter both his and my own sounds in order to make, hopefully, interesting connections.

In search for construction material for these bridges I found that metal bells, chimes and whistling could go well with the sinusoid beauty of a section from Rudnik’s early work Dixi (1967) turned backwards. A train signal is picking up the pitch from the vocals in Breakfast On The Grass In The Cave Of Lascaux (2002) . An accordion, performed here by the Norwegian performer Frode Haltli, is a natural accompaniment to the birds in Still Life With A Bird, Clock, Rifleman And A Maiden (1974). A Norwegian kid sneaks into the blend of cut-up kids’ voices from Lesson I & II (1965). My oscillators blend into his drones, etc.

A recording of a train ride in Japan from September 2000 creates a frame for the first third of the piece. Recorded parts from the concert mentioned, December last year, are interpolated into the entire form, sometimes making me unsure which is my own and which is Rudnik’s source material, needing to go back to the original sources in order to separate us again.

Most of all, it’s the use of my own voice that is leading us through this piece, commenting on and responding to the other sounds in so many different ways: as a small or large bird, as an opera singer, as a militant leader; through a dictaphone (where you can also sometimes hear a harmonica, plucked piano strings, music boxes and other background noises), with the use of contact microphones or very close-up lo-fi amplification, or through a real vocal mic made for the purpose of recording singers. Such purposes are up for grabs. 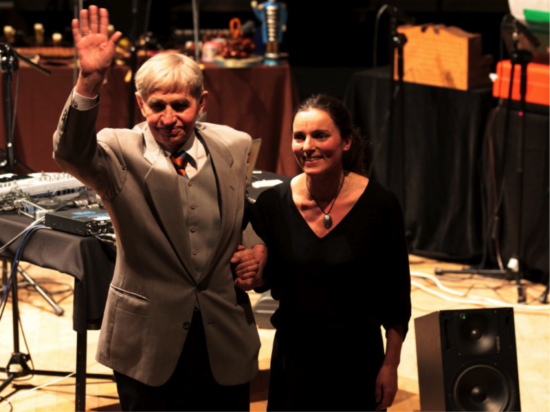 This entry was posted in Blog, Chamber music with live electronics, Electronic music. Bookmark the permalink.