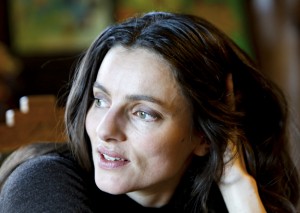 I had never heard of Maja S. K. Ratkje until about three months ago while coming across a recorded collaboration with vocal tormentor, Joachim Montessuis, entitled, “Janus,” through Montessuis’ brilliant Erratum label. More info on “Janus” is available in SEVEN1878’s Best of 2013 list. On “Janus,” so many voices, vocal sounds, etc were present that it was hard to make out which contributions were from Maja, and which were Joachim’s. Looking into Ratkje’s work, I discovered an artist who has been working on her craft (in various disciplines) for 20+ years. Her work is amazing, and I am always baffled that such a talent remains relatively unknown in the US amidst all of our chest beating over who knows about one obscure artist or another. So, for the uninitiated, here’s a brief look into Maja Solveig Kjelstrup Ratkje.

I watched a documentary on electronic music on YouTube where you said that music is about communication and sharing something. What is it that you wish to communicate and share?

Curious to know where this is on YouTube… Can’t recall any interview with me there. Anyway, I am of course talking to those who are not perhaps used to avant-garde music and mistake it for being non-communicative and self-indulgent. Well, I can agree that a lot of new music is giving a good reason for people to think those ways, but I feel an urge to emphasize that what I create is meant for sharing and is an attempt to reach out to people, and hopefully move or change minds. But the ‘communication’ is anyways two-ways. My art is a result as well of how I perceive my surroundings, and the messages I get from people, directly or indirectly. You can say that art is a response to life, and that good art should raise the inconceivable questions to life.

I first heard of you in Lasse Marhaug’s Personal Best zine but never actually took the time to look into your work until I heard the excerpt of your recent collaboration with Joachim Montessuis (Janus). Since then, I have listed to your first solo album, Voice, and two others: Adventura Anatomica and River Mouth Echoes. You are such an amazing artist, yet I have only recently heard any of your work. However, outside of the US, you have achieved so much. Give us a little background into the origin of your work, please.

I have worked as a freelancer for almost 20 years. I have done a lot of stuff in the US as well. I strongly recommend you to check out my website at ratkje.com. There is a solid timeline-biography there as well.

What I can say is that performing and composing has been present my whole life, and is equally important. And that it wasn’t until I hear avant-garde music (jazz, contemporary, electronic) that I really wanted to devote my life to it. I see no purpose reproducing or fulfilling exterior mainstream demands, historical or “contemporary.” My music is often considered on the edge or between art-forms or genres, but I see no reason to fulfill expectations or traditions in any art-form or genre. But it happens naturally, it’s not a decision to be on the fringe of things. Sometimes it really pisses me off.

I even consider genres to be something male defined, that females tend to not fit into art categories in the same predictable way, or not even wanting to claim the “ownership” to new trends or styles. Well, this is just a loose speculation, coming as a result of just having written a book on the female situation in the avant-garde in Norway. (When I use the term ‘avant-garde’, it’s not a genre, it is a term simply describing the forefront of all genres: avant-garde jazz, avant-garde rock, avant-garde film etc. We don’t use the term avant-garde before contemporary or noise, but should perhaps start using it as those terms are getting old and established and predictable as well?)

Of the three albums of yours that I mentioned, Voice resonated the most with me, as vocal experimentation is something that I have great interest in. There’s such a feeling of freedom and zero inhibition present! How were you feeling going into recording your first solo, vocal work?

This is 10 years ago so you should have asked me then! Voice was a needed and natural manifestation of my vocal work at that time, and also for me, a statement that I was serious about performing, not only composing. (I studied composition at the State Academy of Music in Oslo, and the performing part was not encouraged, even though I found plenty of space to perform and keep that part up, especially by forming the group SPUNK with three other musicians, that meant a lot). I wouldn’t have ended up as a pure composer anyway, but a solo album is definitely something that gives you a nice wake-up on your own choices and aesthetics. A good thing to do early in one’s career. Now, the record is re-released, eventually, on vinyl from the label Rune Grammofon.

I have composed for instruments since the beginning. And I love writing scores as well! This is why I studied composition! I have written a lot of works for different ensembles, many times on commissions, and sometimes out of my own interest. It’s only a very few scored pieces I contribute to as a performer myself. River Mouth Echoes is the only disc featuring some of my composed work (not me as a performer in focus).

Zorn knew about my work, and was curious that my scored pieces were not collected in any portrait release. So, he contacted me and I sent him lots of recordings and scores, and the he decided out from that material what would fit on an album on Tzadik. I had to make some new recordings of course of some of the pieces, for example the title piece was not recorded, and that is written for a quartet of viola da gambas, a pre-baroque instrument not used in modern orchestras. It was a huge process, but I am very happy for this and the result. I can see that it confuses some people that I am doing both performance work with the voice and on the other hand I can write a score for a chamber music group. However, in my world, it all connects of course.

Joachim and I met at a festival in Netherlands, was it 2004? Anyway, we have been in touch since, and he was co-organizing a concert with me in Paris at Les Voutes, that is funnily enough the still most seen bootleg on me on YouTube. With Joachim, as you say, I think I have found someone really close to my own aesthetics when it comes to using the voice with electronics. Voice and noise is such a beautiful and strong combination. And trying out our duo has been a new territory for me. I have done voice and electronic duo with Jaap Blonk previously, but that has been more in the free improv domain, with Joachim it’s much closed to the expression I normally go into in my own solo concerts. I am very proud of JANUS, our first vinyl album. And we should play together more as well.

Your work has been featured in so many different platforms over the years. I feel like European countries have a much greater appreciation, and willingness to support, unusual art forms compared to the US. Do you find this to be true as well?

I think this has two sides. On one hand, the experimental, not institutionalized art has better conditions in Europe, so that’s why you can have more people like me, not needing to agree on the conformity of the big institutions (universities, orchestras, opera etc). It is possible, but not lucrative of course, to move on the outskirts of conformity. First of all because there is art support for this un-institutionalized art as well. Not much, but by giving some random support to artists, venues, festivals, the scene can exist and also it generates of course much more than what is given in the first place. And not only by connecting to the society in different ways, or employing staff, but also by contributing continuously to mainstream art. And anyone can see that, that the avant-garde is needed in a society who wants to call itself a “cultural nation”, or civilized perhaps.

The situation is very different from country to country. Political winds shift, and for example in Norway now, we have a new right government which thinks that art has to be sponsored by private companies, even though there has been a long tradition of supporting free art in our country. Oil companies in Norway sponsor a lot of art and culture, and they make contracts with their artists that they cannot change image or even band members without consulting the oil company. Oil companies are in high gear with public relation all the time we are actually moving out from the oil age, and when no other, apart from the oil companies themselves and those who make money on the industry, are eager to support the industry. When the world knows that we have to let 80% of the known oil resorces in the ground, it takes a lot of cultural PR to keep the facade for the oil industry. Their dirty money creates a big dilemma for many artists, and which has moved me to start a network for artists against oil sponsorship: Stopp oljesponsing av norsk kulturliv.

But the situation in US is not so different. I feel that the audience there is very much devoted and interested. The whole avant-garde scene is held up by the audience alone, which is pretty impressive! I see real love and devotion in for extreme, experimental and/or radical art in the US which is sometimes harder to spot in Europe where people are taking art more for granted. But the art world needs support in order to exist, and to develop as an artist you simply can’t have two full-time jobs on the side. All sorts of people are needed (not only those who can afford it by external reasons) for the avant-garde to move on.

Voice, electronics, and instrumentation are all tools you make use. Do you have a preferred method among these three? Are you able to communicate more through one over the other, or does each allow you to express different things?

I like expressing myself through different art medias. Sometimes I deliberately try to create unknown situations, and that triggers my creativity. As long as I get ideas, I can keep composing and performing. I feel that I am in a continuous move, always on the search for tools and new combinations. Sound is essential for me, more than concept I think, and the creation of rooms, making hybrid concert forms with direction, light, visual art, something that cannot be easily documented, that has been the most interesting works the last years. I can mention works like “Gare du Nord”, “Crepuscular Hour”, “Putin’s Case”, “ROM”, “Birds & Traces”, “Engebøfjellet…” etc.

Who are five artists that you believe that people should look into?

Tons of concerts, in Europe, in US, and some composing, a new piece for orchestra – my first orchestra commission from Norway. Trying to keep up my activities at my website.

This entry was posted in Blog, Interviews in English. Bookmark the permalink.