Reviews from Punkt Festival 2013 (in English and Norwegian)

by John Kelman, All About Jazz:

experimental vocalist/composer Maja S.K. Ratkje delivered a set that lived up to Mullan’s introduction, which described three people coming out of a show in Belfast, and one of the responses being “she scared me shitless.”

It may well gave had a similar effect on some of the audience members at Punkt, but veterans that they were, they rarely showed it. Ratkje is also a member of the longstanding, all-female improvising group Spunk and the duo Fe-Mail, in addition to releasing albums on North America on John Zorn’s Tzadik label like River Mouth Echoes (2008), in Norway on Rune Grammofon, and either appearing on or composing work for her husband, accordionist Frode Haltli, on ECM Records including 2007’s Passing Images. She last performed solo at Punkt in 2009, but in a double bill with Sidsel Endresen; that meant shorter performances for both—though it couldn’t have provided a sharper contrast between the two singers’ almost diametrically opposed approaches> She also delivered a truly epic live remix of an Estonian choir performing the music of Veljo Tormis in 2010 that was amongst that year’s best.

Beginning with the simply repeated word, “grace,” Ratkje began in spatial territory: gentle, at first, and beautifully melodic, with hints of Middle Eastern tonalities. While Endresen is the queen of acoustic voice experimentation, few singers integrate technology as Ratkje does. And she knows how to build a set, with near-episodic periods of ebb-and-flow, as she began to introduce a gently metallic percussive tone that faded in and out. Ratkje also possesses a rare ability to layer her voice in ways that make clear just how deep her understanding of harmony is. With a small microphone that she placed in her mouth to create vocal sounds not otherwise possible, her drone- based improv became increasingly more angular and rough-hewn

And if she scared that Irish attendee shitless, if anything, her set got scarier by the minute as she began to inject screeches, sibilant “sah’s” and rapid chatter, all building to a cacophony of clearly controlled chaos—but controlled was the key, as she held a note for a seemingly impossible duration without the slightest hint of a quaver.

After building to a cathartic climax, she gradually brought things down again to come full circle to her gentle beginning, with simple words, processed chimes and a more mellifluous singing voice. Ratkje’s clear understanding of dynamics and how to structure a set made this her best main stage appearance at Punkt, completely in the moment and with sheer and unerring instinct.

With Trømso-based electronics artist Per Martinsen alone for the remix—and, as became increasingly the MO this year, largely hidden behind an opaque curtain with only a silhouette of his body visible—he demonstrated the same kind of internal rhythm as Bang, a pulse that may or may not be revealed to the crowd…only time would tell, as the remix progressed.

In this case, there was, indeed, a pulse, but it was an odd one that combined some strange vocalizations from Ratkje—”Aooga,” “Waaaah” and “Sah!” looped. But this only came after an opening with very little voice and a lot of gut-punching low frequencies. It was an odd remix, but one where, once again, the improvisational aspect of Tord Knudsen’s visuals could not be overlooked. Knudsen responded with the same split- second instincts as any other musician, with Martinsen incorporating a wealth of discrete elements (how he kept track of them all was anybody’s guess) into a sonic soup that closed the evening off on a high note. 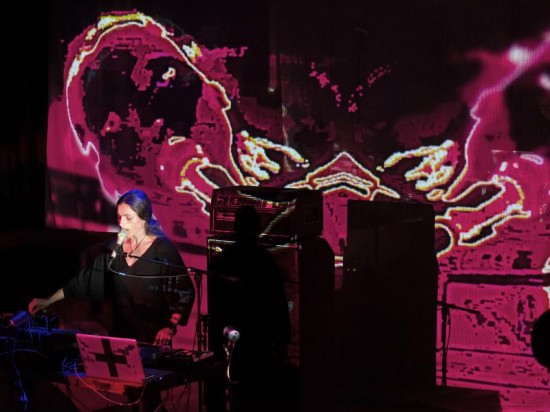