by Martin Schray and Paolo Casertano 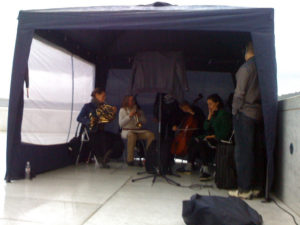 12 is a magic number. A year has 12 months, there are 12 hours a day twice, we have 12 signs of the zodiac, King Arthur gathered twelve knights at his round table (each had a special virtue), Jesus had 12 disciples, the old Jerusalem had 12 pearly gates, the Kabaa has 12 edges, in the Jewish Kabbala 12 is the symbol of the order of time and space, and in astrology it is the holy cosmic number of perfection … and we could go on like this almost endlessly.

SPUNK, an all female Norwegian music collective consisting of Maja Solveig Kjelstrup Ratkje (voice, violin, harmonica, accordion, theremin, various objects), Hild Sofie Tafjord (French horn, electronics), Lene Grenager (cello) and Kristin Andersen (trumpet, flutes) started their long-time project “Das Wohltemperierte SPUNK” on January, 1st, 2001 at 8.01 p.m. (which is 20.01.2001 at 20:01 in European writing/counting which we will use further on) and finished on 20.12.2012 at 20:12 (8.12 p.m.). The idea was to play one single note as long as the musicians felt like, one per year, each at a different, unusual place in and around Oslo – at locations as different as the mysterious, almost gloomy interior of the Emanuel Vigeland Mausoleum with its twenty-second reverberation time; the Nobel Institute; an idyllic cabin on a remote island in the Oslo fjord; a tent on top of the slanting roof of the newly built Opera House; the river Akerselva in Nydalen (an Oslo suburb), a simple basement, St. Edmund’s Church, Hønse-Lovisas House at the river Akerselva, the Physics Department of Oslo University, Gamle Aker Church, the vivid shopping mall Oslo City, and a private domestic living room. The exact time of each following concert would have been determined by the starting moment of the former one – according to EU time notation – then 20.02.2002 at 20:02, 20.03.2003 at 20:03 and so on until the eleven years, eleven months, eleven minutes later closing performance to reconnect the cycle (or to interrupt it for ever?).

The number 12 was meant to be of crucial importance and there are even more ways how it is used in the project. Starting with the key note B and ending with a G, SPUNK have finished a musical trip that took them through the 12 tones of the well-tempered tuning of the chromatic scale Anton Webern has used for his famous String Quartet opus 28, which closes a circle by spelling out B-A-C-H in the first four notes – apparently a reminiscence of Johann Sebastian Bach, who composed the original “Das Wohltemperierte Klavier”, a study of each note of the well-tempered scale. However, the group has found its own approach by playing one single note as long as they felt like.

And let’s be frank: “Das Wohltemperierte SPUNK” is a masterpiece, a total work of art. It conceives an acoustical notion of how men live, a sonic painting of life on earth in general, a musical universe celebrating creation and civilization because of the selection of the places involved – from commercial centers, cultural venues, sacred sites and private apartments to natural surroundings. As a matter of fact, a really ponderous act of music dealing with the impressive and personal improvising attitudes of each member, as much as with a deep work of analysis and organization of their own semantic skills preceding the final musical dialogue, where each voice, each statement find its own value in the comparison and opposition to each other, given the boundary of using a shared and limited vocabulary composed of just one term with multiple meanings (or of one reference with multiple senses if we imagine that this difficult work collides not just with a celebration of the tempered scale and the tonal music in general, but in some ways also with its overtaking).

What makes the album so fascinating is the wide range of unexpected representations; the music is as surprising as life itself. If you listen to the two concerts in the churches you find the performance at Gamle Aker Church (Ab) the sacred, ethereal and even psychedelic drone one might expect (at least the first part). However, the concert in St. Edmund’s Church (D♯) is raw and tough. Especially in the first part Ratkje’s voice very often tears the track apart. It reminds of a character in deep turmoil, as if the person is looking for emotional support or even salvation.

The four concerts from June to September form a block being the ones recorded in natural environments, in which the sounds of a river, of seabirds and waves provide a natural sound carpet which contrasts the sometimes rough and distorted instruments.

The structure, the dilated execution, its final physical and usable output (something that you concretely listen, not waiting twelve years and going around in a city) must be reconnected to famous ancestors as the cycle “Licht” by Karlheinz Stockhausen dedicated to the days in a week (more than 29 hours of music) or Giacinto Scelsi’s “Quattro pezzi su una nota sola” (Four pieces on only one note) where length, repetitiveness and the choice of a minimal musical vocabulary, exactly as in this SPUNK’s work, is not just mannerism but an effort to produce a new musical paradigm, solipsistic if you wish (just the player himself is really present to such kind of performance in its entirety, but you could also say that it’s not the same performer for its whole deployment) but certainly aiming to the noble intent of reinventing both the traditional compositional approach and the usability of an opera.

But this conception can be seen also as kind of “dangerous”, creating in some way an irremediable fracture between the musician, the only real beneficiary of the whole picture and the listener, compelled to rebuild the size and the details of the fresco only through wait and great attention, its virtue instead to be found in its affinities with the processes of everyday life.

From the background voices of the mall to the birds chirping behind the instruments on a little island while the water is flowing, up to the aseptic resonance of the Physics building or the echo of Nobel Institute that SPUNK try to mitigate with an accentuated ethnic and folk timber (mainly because of the dominant presence of Ratkje’s accordion and vocalizations à la Meredith Monk driving the composition towards an impetuous finale). In every situation the group achieves a deep hybridization with the surrounding environment developing an original language to speak in that peculiar context.

Emblematic is the connection in the performance held on the roof of Opera House, that is already architectonically as much conceptually – with his rigid geometry made of white sharp surfaces and glass, contrasting with the warm wooden predominance inside the structure located in the heart of the city of Oslo but at the same time like stretching out towards the sea – a junction between the human territory and the nature (an aspect always to be considered in the Norwegian culture and consequently in the national musical production), between what you want to say and what you can really express.

On the one hand this concept is a highly complex notion reflecting today’s modern life, an abstract soundscape, it even seems artificial in its proximity to mathematics. But on the other hand – as to form and content – this is a really punk/DIY approach in its “simplicity”. Everything seems to be possible, from ambient Native American chants to hardcore electronic shredder, you can recognize SPUNK’s absolute individual style and their will to cross borders, it is an other-world field recording of unheard sounds.

This entry was posted in Blog, Das Wohltemperierte SPUNK and tagged SPUNK. Bookmark the permalink.