Anton Webern’s mathematically centred String Quartet Op 28 (1938) is one of the most influential and controversial works of the 20th century – expanding on Bach’s music as it explored the tempered 12-tone scale, Webern tipped his hat to the great composer with the first four notes of his landmark work, spelling out B-A-C-H. In January 2001, the Norwegian improvising quartet SPUNK set out on their own exploration by playing a concert based on one pitch from the 12-tone row every year until they completed the cycle in 2012. The first concert took place on 20 January 2001 at 20:01PM, the next on 20 February 2002 at 20:02PM, and so on. The group improvised around a single pitch on each occasion, retaining Webern’s tribute to Bach by utilising each note from the String Quartet’s 12-tone row in the same order (the title itself nods to Bach’s own Well-Tempered Clavier). Whatever the resulting music, the project deserves applause for the focus and stamina required for such a seductively conceived project, and this beautifully designed box set provides a fitting home for the finished work.

The 12 concerts all took place in Oslo, but in sites away from the usual experimental music circuits. If the music is all relatively similar – detailed, droning acoustic works for trumpet, French horn, cello, voice and more – then each is subtly coloured, not only by the use of a slightly shifted pitch each time, but by the sounds and resonances of the venues for each performance. The drone in B flat reverberates around the cavernous interior of a mausoleum; the key of D on the roof top of an opera house; C in a busy shopping centre.

Each performance contains stuttering, agitated, but ceaseless meditations on that year’s pitch – the all-acoustic instrumentation means that the limits of human breathing ability and the length of a cello bow lend a sense of pulse to the music, yet over six CDs it feels unrelenting. In normal circumstances, without the detailed majesty of the project’s wider structure, one disc of this music would probably be enough, but it is the bigger picture and unrivalled resolve that makes the package work so well. 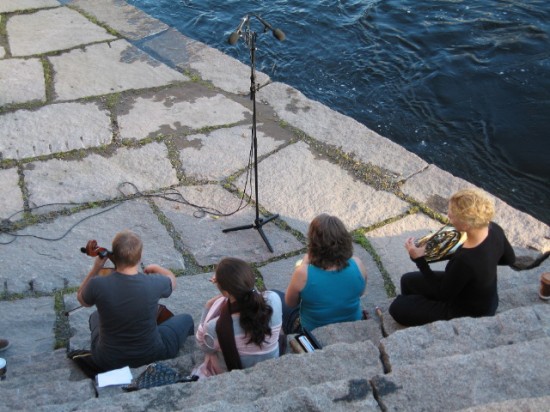 This entry was posted in Blog, Das Wohltemperierte SPUNK and tagged SPUNK. Bookmark the permalink.