Norwegian composer and performer Maja Ratkje has worked with classical groups and metal bands. But it is her opera for babies that has brought her international fame 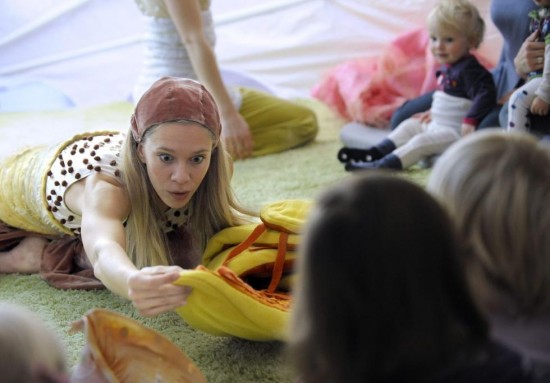 At an arts centre in Asker, a small Norwegian town a few kilometres from Oslo, a select crowd has gathered to witness a new opera. Although the audience for contemporary music is generally small, it is rarely as small as this. Some of the attendees are less than six months old. The majority have to be carried in by their parents as they are not yet walking.

Korall Koral is an opera aimed at children aged from nought to three years old. It takes place in a comfortingly womb-like canvas shell filled with strange objects suggestive of the sea bed (the title is a play on the words “coral” and “chorale”). Amazingly, there is no restlessness: the children sit transfixed as a pair of sea creatures enact underwater rituals and perform gentle arias on invented instruments such as jellyfish chimes and a sea horse harp. A noisy conch barks out random phrases, rather like the bossy loudspeaker from the Teletubbies. It is surreal, short (20 minutes, plus unlimited playtime afterwards) and curiously how one might imagine a staging of Rusalka combined with an episode of In the Night Garden.

The music has been written by Maja Ratkje, an intense 39-year-old with raven hair and startling green eyes, who is one of Norway’s most well-known composers and performers. As well as writing for babies, she has collaborated with the Renaissance viol consort Fretwork and Scandinavian metal band Enslaved; though she is best known for producing a series of solo albums whose extreme, improvisational vocal style makes Björk sound as tame as Julie Andrews. British audiences have the chance to experience Ratkje’s three-octave span at this year’s Huddersfield Contemporary Music festival, where she has been appointed composer-in-residence. But with more than 300 performances since its debut in the foyer of Oslo’s futuristic new opera house, it is the baby opera that has become her most surprising international hit.

“Who wants to make art for this age group?” Ratkje says. “Almost no one. Perhaps the prestige is too low for professional artists, yet it seems the most obvious thing to do. There’s always a ready supply of new babies.”

There have been attempts to target tiny music lovers before. Two years ago, Scottish Opera had a notable success with the interactive piece BabyO; while Sydney Opera House has run its popular series of Babies Proms for 30 years. But Ratkje’s piece, created in collaboration with designer Christina Lindgren and performer Hanne Dieserud, offers a genuine introduction to operatic voices with no artistic compromise.

“The worst thing you can do with very young children is to try too hard to entertain them,” says Ratkje. “They don’t need narrative, but are perfectly capable of concentrating on something strange and fascinating, such as an opera. There have been children in the audience as young as two or three weeks old. Parents often tell us it’s the first time they’ve seen their babies begin to focus on something, or even smile for the first time.”

Ratkje, Lindgren and Dieserud have already completed a second work for under-threes: a retelling of the tale of the Billy Goats Gruff, performed in abstract vocal sounds mostly derived from Vietnamese. “There’s quite a sizeable Vietnamese community in Norway,” Ratkje explains. “I love the sound of the language though I don’t understand it.” Yet writing operas for babies is not a complete departure from her usual line of work, so much as a quieter alternative. Her gargantuan site-specific piece Crepuscular Hour, created for one of Oslo’s largest churches and due to receive its British premiere at Huddersfield, bombards the audience with three choirs and an enormous sound-and-light installation. “I wouldn’t take babies to that,” she advises. “It’s too loud. But I like noise. I’m not afraid of it.”

In fact, Ratkje can claim to have created one of the loudest compositions on earth. Two years ago, she wrote a piece for the world’s largest pair of horn loudspeakers which blasted a 130-decibel sample of bass trombones and seagulls across a remote Norwegian fjord. “It was created as a protest piece for the villagers of Vevring, which is threatened by a mining scheme that will dump 200 cubic metres of contaminated waste into a salmon fjord,” she explains. So what did the villagers make of having an immensely loud piece of contemporary music on their doorstep instead? “They loved it. We had to play it for longer than originally scheduled. The idea was to create attention: and to that extent it worked – so far, the mining has not gone ahead.”

Ratkje recently caused a stir when she demanded that the sponsorship logo of a Norwegian oil company was removed from all advertising material featuring her work. And she even managed to upset the United Nations when a piece written for the Norwegian Girl’s Choir was banned. “That was so ridiculous, it was funny,” she says. “The performance was to take place in the general assembly hall of the UN. In one section of the piece I asked the girls to improvise, by shouting out the names of notorious power-abusers and dictators. An official heard the girls rehearsing and cancelled the performance.”

Yet the fiasco could still have a positive outcome. “While at the UN, I met Norway’s new environment minister who told me he’s aware of the giant horn piece and says he’s a fan of my work,” Ratkje says. “So perhaps music really does have the power to save the planet after all.”

Some strange mistakes in this article! Can you find them?
This entry was posted in Blog, Interviews in English, Korall Koral. Bookmark the permalink.