A piece on Putin, KGB, Pussy Riot, emprisonment and hope.

Part 1 has the bass singer reading (in a very musical way) from Marcel Beyer’s text “Putins Briefkasten”, an encounter with the cold war agent Putin who was stationed in Dresden in 1980. The story unfolds as the autor is searching for Putin’s old mailbox which of course is no longer there.

Part 2 is a meditation on the Russian national anthem, lead by the counter tenor singer. This is accompanied with the following text (to be read or printed):

On the 7th of May, 2012, at the inauguration of president Vladimir Putin, a special ceremony was held where Putin received the Russia’s “nuclear briefcase”. The control of the “nuclear briefcase” is a symbol of political authority. It contains the codes to the nuclear arsenal in the country. The briefcase looks similar to a laptop case and allows the president to give the order to launch a nuclear weapon, by transmitting the permission code to the commanding staff of the Strategic Missile Forces (SMF). It also gives the president an early-warning signal of any attack. Russia’s defence minister and the chief of the General Staff also have similar nuclear switches.

Part 3 is lead by a female singer reading as if she were a newsreporter the following translation of the text performed by Pussy Riot causing their conviction:

Black robe, golden epaulettes
All parishioners crawl to bow
The phantom of liberty is in heaven
Gay-pride sent to Siberia in chains

The head of the KGB, their chief saint,
Leads protesters to prison under escort
In order not to offend His Holiness
Women must give birth and love

The Church’s praise of rotten dictators
The cross-bearer procession of black limousines
A teacher-preacher will meet you at school
Go to class – bring him money!

Patriarch Gundyaev believes in Putin
Bitch, better believe in God instead
The belt of the Virgin can’t replace mass-meetings
Mary, Mother of God, is with us in protest! 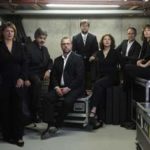 This piece was composed for Olaf Nicolai’s ongoing project “Escalier du Chant”, with Neue Vocalsolisten Stuttgart. The performance took place at the Museum for Contemporary Art in Oslo under the Ultima Festival 2012. Performers in the piece included Truike van der Poel, Daniel Gloger and Andreas Fischer. Live electronics by the composer.

A later version of the piece, “Putin’s Case 2”, is adapted for the singers without the composer present.