In the run up to her live collaboration with Ikue Mori, Norweigan performer/composer Maja Ratkje talks about collaboration, experimental music and vocal limits. 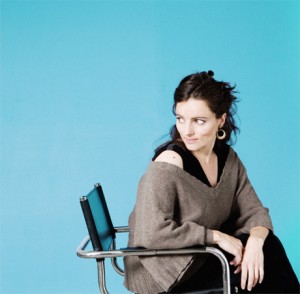 You’ve worked with an eclectic array of collaborators throughout your career. Is it always easy for you to adapt to different collaborative company?

No, and I carefully choose my collaborators, but I also need to take chances, and ad hoc constellations are sometimes very inspiring, especially in the field of free improvisation. Perhaps my interest in and background in very different styles of music and art has brought me into collaborations where “normal” contemporary composers and free improv musicians don’t go. Hopefully that can result in something interesting for an audience as well.

You came into experimental music rather late into your life. How did you find embracing experimentation and improvisation for the first time?

Coming from a family with no particular interest in art, I had never really heard any avant-garde music until I started to listen to experimental and modern jazz in the early nineties. Then, hearing the music of Arne Nordheim in concert for the first time, when visiting the Philharmonic Orchestra in Oslo, opened up a new world. Having only one state channel on TV and radio, all Norwegians were brought up to know who Arne Nordheim was, and the consensus was that the music was too strange and modern to be music at all, but listening to his music I found it shockingly beautiful, and I also found that it was through modern music I had to express myself, if with music at all. I spent a couple of years listening to contemporary music and started to compose: my favourites (and they still are) were Stockhausen, Xenakis, Scelsi, Varese. And I also started to perform with SPUNK, which was established in 1995. Our goal was to improvise a new sort of music that we had never heard before, not related to any music genre, and referencing any genre that we liked. There was no-one doing that in Oslo then, but the scene exploded a couple of years later with clubs like BLÅ and labels like Rune Grammofon.

How easy was it to strip away traditional music’s preconceptions of what a voice “should” sound like?

It wasn’t a project at all – it came naturally, through playing and rehearsing a lot with my colleges in SPUNK (Hild Sofie Tafjord- French horn, Kristin Andersen – trumpet/flutes and Lene Grenager – cello) We had this thing where we rehearsed copying each other sounds, such as if Lene played an impossible sound on the cello, I was to copy it as exactly as possible with my voice, change the sound and pass it on to the next person. And then, the sheer enjoyment of improvising, being curious and always searching for something “different” brought me into places that trained classical singers would sell their relatives to escape.

Is there anything in particular that draws you to the voice as an instrument?

The voice was a natural choice for me when I wanted to make my own sound. I have always used the voice, I have been singing my whole life, and it’s an immediate tool for expression. It is also an interesting door-opener to a world of narratives and language and lots of bastard forms of these combined with music. The possibilities when using the voice are so much greater than with conventional singing (classical arias, musicals, popsongs, metal), and I see no reason not to explore those further. I also found that I have a flexible voice and can do things that sound different without hurting it.

Having worked with the voice now as your primary instrument for so long, do you still feel as though you’re exploring its capabilities?

Absolutely, I am continuously changing and developing the way I sound. I am not searching for the most extreme sounds, as if to have something to show off with technically, it is purely about finding sounds and expressions that coincide with my musical intentions. The electronic setup is an extension of my voice, and is also always changing.

You’ve been creating improvisatory music as part of SPUNK since 1995. How has your collaborative relationship developed over the years you have worked together? Is it easy to maintain a spontaneity and experimentalism?

I think the reason that SPUNK still exists is that we find new things along our path, and that we don’t play too much (even though we play and work together regularly), so we don’t get tired of each other. In recent years we have moved more into art projects and installations than concerts, which I find extremely inspiring and fun to work with.

Are there any differences in the way in which you approach solo performances compared to collaborative ones?

Naturally, because the solo format is not an interplay with someone else, and I have to prepare for being more interesting on my own, and being able to handle all the layers needed in the music that I aim for. It is very challenging to play solo, especially when the whole form is free improvised, I hate it and I love it. I need it in order to reality-check with my own aesthetics.

How have you ended up working with Ikue Mori for this upcoming string of UK dates?

I have performed and recorded with Ikue in several constellations (but not yet as a duo!), since 2004, so this is not a shocking new formation. I was very happy to get this chance.

Do you have any expectations as to how your sound may entwine with Ikue Mori’s in these upcoming live improvisations?

Her sounds are very sophisticated and precise, my sounds are more blurred, perhaps also sometimes more like her sounds, percussive or carefully placed. We’ll see!

This entry was posted in Blog, Interviews in English. Bookmark the permalink.