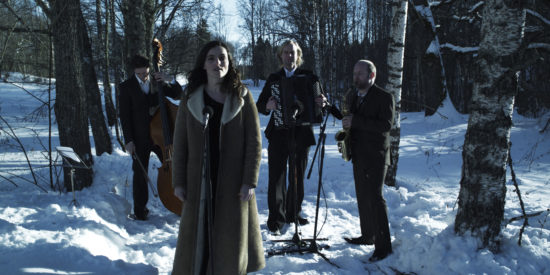 Set aside the countless versions of “Mack the Knife,” which too often devolve into camp, and Bertolt Brech’s collaborations with Hans Eisler and Kurt Weill can provide a fertile launching point for improvisers. When done right, the core theatricality and harmonic complexity of the themes and the underlying inversions of scrappy dancehall meters offers up a balance of formal foundation and open framework. The most memorable projects have been undertaken by Europeans like Phil Minton, Willem Breuker, Mike Westbrook, Heiner Goebbels and Alfred Harth, and Dagmar Krause, though Hal Willner’s Lost in the Stars is certainly worth putting on the list. Add to this list a recent collaboration by the Norwegian trio Poing and vocal explorer Maja Ratkje.

Poing, consisting of double-bassist Håkon Thelin, saxophonist Rolf-Erik Nystrøm, and accordionist Frode Haltli, formed back in 1999 to perform contemporary composed music while also incorporating aspects of improvisation. The three are all conservatory trained but have extensive backgrounds in Norwegian Folk Music and free improvisation, which is evident in their playing. While they have developed an extensive book of compositions for their trio, they also have an ongoing collaboration with Ratkje, playing her own compositions as well as a program of music by Brecht/Eisler/Weill, which they have been performing at an annual concert on the night before May 1st, the International Workers’ Day, in the clubs of Oslo.

In their short artistic statement on the inside of the CD, the musicians state “The Red Revolution has a new face in our time. Is it progress or sentimentality? How can we, by caressing old idioms with contemporary lust and energy, suggest an inviting alternative to the egocentric postmodern capitalism and liberalism?” Those familiar with Ratkje’s music via groups like Spunk, fe-mail, or her duo with Lasse Marhaug will initially be in for a bit of a surprise. Her dark, vibrato-laden voice fully inhabits this music, moving through familiar pieces like “Der Morgenchoral Des Peachum,” “Der Song Von Mandelay,” and “Die Seeräuberjenny,” as well as pieces that are less familiar. Poing fill things out nicely: the orchestration of Haltli’s organ-like accordion is augmented by bass trombone and harmonium; Nystrøm’s lithe reed playing ranges from from snaking soprano to cantankerous alto interjections to klezmer-like clarinet; Thelin contributes a rich-bodied arco and rumbling bottom end.

The whole program caterwauls and swirls as the pieces fly by, melding into each other with quavering freely improvised intros and sputtering textural codas. Other than a resplendent extension of “Die Seeräuberjenny” and the instrumental extrapolation of “Youkall Tango,” the readings are compact. But this is not a tradition-bound take on things, as the four introduce themes from across the musical spectrum. On one end, there are Eisler’s “Nationalhymne Der DDR,” written in 1949 when East Germany became a Socialist country and “Gosudarstvenniy Gimn SSSR,” the State Anthem of the USSR, written around 1944; both are stripped of their pomp and played as stately melodies. Those are countered by the inclusion of two stomps through Minor Threat’s “Seeing Red,” a quirky take on the pop anthem “True Colors,” and a setting of Norwegian revolutionary poet Rudolf Nilsen’s “Street Boy” to Mingus’ “Fables of Faubus” thrown in for good measure. While faithful to the bones of Brecht’s compositions, the music is invested with loose wit, energy and invention.

In these socio-political times, this music could hardly be more relevant and this Norwegian group delivers the goods.

Michael Rosenstein
This entry was posted in Blog, Wach auf! and tagged with POING. Bookmark the permalink.