Kineticism and Inclusiveness In The Music Of Maja Ratkje 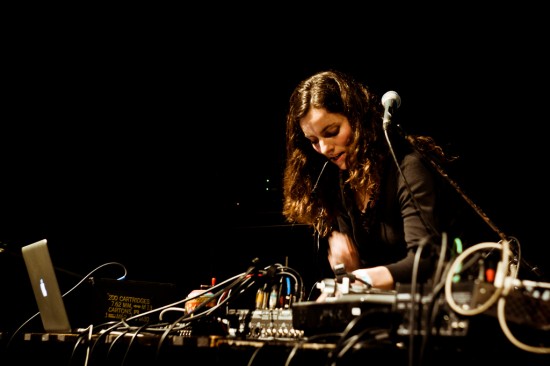 Movement: a musical term yet seldom does one truly get a sense of movement, as in aliveness, that one witnesses in our natural, or “real” world in art — that beautiful sense of chaotic activity of the kinetic street or beach or forest; wind, buses, excited children, birds flapping, branches swaying, fluorescents flashing, smoke, puddles; life. Often in artistic practice there is a solitary meditative focus that solidifies the work itself into a block. Even with the intention of making movement central to the work, be it with dance, film/video or diffused multichannel set up, the music itself can remain a block of sound, settled in the space like a thick fog. Its as if when a composer signs off on a work, be it to paper, recording or even a performance, be it improvised or the “slowed-down improvisation” of composition, it petrifies.

Comparatively, when listening to the never dormant music of the tremendously active self-defined “performing composer” Maja Solveig Kjelstrup Ratkje one experiences a sense of the vastness and detail of the living world. This is heightened when she is collaborating in duos and groups such as Fe-Mail and SPUNK.

This dual sense of vastness and detail in Ratkje’s work, and her self-proposed discipline “performing composer” can be seen as a drive towards inclusiveness. Journalists and critics attempt to create controversy when an artist claims more than one discipline or genre. The idea of restricting may come in useful as self-discipline, a way of achieving a specific and sought goal by and for the artist, but is of no help to the arts at large when imposed by theorists. Instrumentation, approach, and execution vary from project to project in Ratkje’s sound world. There is no acceptable reason anyone should be shocked by this, but eyebrows are nonetheless raised, especially, according to the artist/subject of this essay, no more than in the conservatory based composing community.

In turn this inclusiveness can be something seen as a central characteristic of the improvisational noise school of music, according to Ratkje, with its strong tradition of non-musicians, extended community, and so on. Though there is debate voiced by the San Francisco Bay Area Noise Music community overheard by the author, practitioners and critics have questioned the inclusiveness in this scene, namely that of the dominant presence of men as well as a noted cliquishness. However, it could be argued that these features are characteristic of any established art school or genre.

Permanently inspired by Karlheinz Stockhausen’s Gesang der Jünglinge (1955/56), upon hearing it when attending The Norwegian State Academy of Music in 1995, Ratkje discovered a newfound love of composition, following two decades studying as player and singer. At the Academy, Ratkje formed SPUNK with three other students, Kristin Anderson (trumpet, recorder), Lene Grenager (cello) and Hild Sofie Tafjord (French horn). Later, Ratkje and Sofie Tafjord would collaborate as the duo Fe-Mail. With monikers stating the all woman make up of these two groups (the name SPUNK was initially a reference to Astrid Lindgren’s Pippi Longstocking), these projects are primarily improvisation based, taking cues from free jazz, contemporary classical, and most notably noise music.

Of all her releases Ratkje’s vocal performance has the most lasting impact on international audiences. Voice, her solo debut, was released on the noteworthy label Rune Grammofon that ran in the same contemporary music based circles of Oslo. SPUNK had previously put out a few cds on Rune Grammofon. Though one can theoretically conclude a conservatory tradition in Ratkje’s work, citing Cathy Berberian and Joan La Barbara as a lineage leading to Ratkje. She makes a point, however, not to be defined as a vocalist, saying that to put her along side avant singers such as Joan La Barbara and Cathy Berberian would be to apply sort of “circus” element and take away from the music itself. This notion is greatly supported by the thoughts expressed by Berberian herself, heard within La Barbara’s 1977 piece “Cathing.” While overlooking La Barbara’s agenda within the piece for the moment, we hear a recording of Berberian state that extended vocal technique is a limiting and has a “freak element” from which she distinguishes herself as she can “really sing.”

Voice (2002) is sourced entirely from Ratkje’s voice, made an impact on the avant record market and press, and reportedly influenced Björk to record her accapella release Medúlla. Though one could make a case of a thread of commonality between these two conservatory trained, restless genre hoppers, Ratkje seldom ventures fully in what one could call traditional song as Björk more accessibly does.

The duo Jazzkammer co-produced Voice with Ratkje. Comprised of fellow Oslo noise travelers John Hegre and Lasse Marhaug, Jazzkammer met Raktje at an Otomo Yoshihide workshop. With Yoshihide’s workshop incubating an ongoing musical relationship between Ratkje’s and Marhaug, it’s interesting to note the aesthetic similarities of the Japanese and Scandinavian noise scenes. Both cultures have been stereotyped as having an emotionally stifling formalism. Ratjke sees noise music as “a release, or a celebration” and can possibly be seen as a counter a staid, cerebral culture where more immediate, raw communication is shunned. Incidentally, both countries’ noise scenes are of the most internationally respected and referenced.

Norway is also noted for one of the longer lasting and highly discussed black metal traditions. Never to pass on stretching her creative muscles into new territories, Ratkje, along with Fe-Mail co-member Sofie Tafjord, have collaborated with members of the Norwegian black metal group Enslaved and produced material under the guise of Trinacria. These songs weave the wordless, reverberated tones of Ratkje voice and Sofie Tafjord’s processed French horn with the melodic pummeling staccato of more traditional rock instrumentation, guitars and drum kit, perhaps producing Ratkje’s most commercial work to date. It certainly sounds as if Fe-Mail is having fun, and by complicating the über masculine tendencies of metal, we hear for the first time something akin to the play with gender norms indicated in Fe-Mail titles and cover images, such as Syklubb fra Hælvete, Voluptuous Vultures, All Men Are Pigs, “Gossip” and “It Becomes Her.” Otherwise Ratkje, who identifies herself a feminist, chooses to allow her music to be absent of direct political sentiment. Recognizing the powers of ambivalent abstraction and its constant ability to move, morph and contradict itself, which creates in turn a humanistic music, which is universally liberating.

When communicating via email with two recent Ratkje collaborators, Norwegian electronic musicians Bjørn Hatterud and Ronny Waernes, Waernes interestingly first calls Ratkje “a well known and acclaimed classical composer” and has said “she masters performing melodies on instruments.” Hatterud points out that “she plays it with the fingerspitzengefühl that only a classical trained composer can.” and besides the musical product the prolific Ratkje has produced, she is also recognized as a philosopher, or as he put it in his non-native English “a thinker”. She has written and been interviewed on subjects outside of music including an article on Philosopher Henri Bergson’s theories about how “all change (movement)… must be understood as a whole.” This concept plays out well, for example, in this recording:

A constant aliveness that presents an understanding of “the whole”, and breaks through this condenser mic in the back of the room recording which could have fossilized a lesser performer. In another piece of writing, Ratkje moves from “thinker” to a teacher in her “Nine Prerequisites for Inspiration”, published in 2006 in the John Zorn edited Arcana. In an article mainly about improvisation, Ratkje’s breaks down of what she calls “communication on three levels” — which, in short, continues from Bergson’s theories as well as perhaps touching on Gaston Bachelard’s “Poetics of Space”— when she reasons that the primary level of communication is “the meeting place for the art, the time and the room and the people in it.”

© Benjamin Ethan Tinker, 2011
photo by Lubomir Panak, Bratislava Dec. 1 2011
This entry was posted in Blog, on Maja in English. Bookmark the permalink.