Wach auf! reviewed by All About Jazz

Wach auf! (Wake up! in German) is only the third release by POING in its 12 years of activity, but what a remarkable achievement from a Norwegian trio whose repertoire encompasses compositions by pioneer minimalist composer Terry Riley, nuevo-tango composer Astor Piazzolla , political alt-rock band Rage Against The Machine, Russian songwriter Vladimir Vysotsky, Prince, Charles Mingus, and many more. 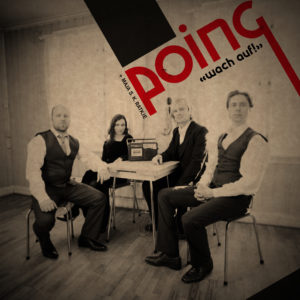 This genre-bending trio decided, this time, to pay tribute to some of the iconic, socialist-tinged songs of Berthold Brecht, Kurt Weill and Hans Eisler. POING and long-time partner Maja S.K. Ratkje have been performing these songs for over ten years as an annual concert on the night before May 1st, the International Workers’ Day, in the clubs of Oslo.

The album title is a fitting name for a collection of songs that were calling for a red revolution in the 1920s and ’30s, but are still relevant in an age defined by egocentric, postmodern capitalism and liberalism. POING relies on Brecht’s advice, encouraging artists to play with and exaggerate the elements used onstage. This involved “stripping the event of its self-evident, familiar, obvious quality and creating a sense of astonishment and curiosity.” By doing so, he hoped to communicate that the audience’s reality is equally constructed and changeable.

POING and Ratkje don’t hesitate to play and reconstruct these iconic songs, injecting their own sense of humor and irony, and performing them with great passion, highly creative arrangements and excellent musicianship, making them their own without surrendering to nostalgia. The charismatic Ratkje leads the quartet with her operatic voice and commanding theatrical performance—in the vein of great female interpreters of Brecht such as Lotte Lenya and Ute Lemper— but in her own idiosyncratic style. She sings socialist anthems, such as “Solidaritätslied” (Socialist Unity) and “Revolusjonens Røst” (Revolution Calling). In their native German in a natural manner, while POING adds an ironic march-like rhythm and choral vocals that sound like a tribute to the Red Russian Army Choir on “Solidaritätslied,” and a happy Klezmer-like arrangement to “Revolusjonens Røst.”

“Nationalhymne Der DDR” (the anthem of former East Germany) and the “National Anthem Of Russia” are deconstructed and stripped down from their original pathos and sentimentality, performed instead as short beautiful melodies. “Die Seeräuberjenny” (Surabaya Johnny) begins as a straight-ahead reading of the famous song, but POING and Ratkje evolve the arrangement into a festive, futuristic, noisy set of sounds that portray a failed love affair. “Youkali Tango,” performed by POING alone, is the only song to retain its original cabaret-like outline, but with much more room for freely improvised interplay, while Ratkje delivers “Kanonensong,” from the Three Penny Opera, as detached from its emotional, historic context, sung as if it were a modern song depicting another tragic war.

This entry was posted in Blog, Wach auf! and tagged with POING. Bookmark the permalink.