RECORDING OF THE MONTH: Come Away Death 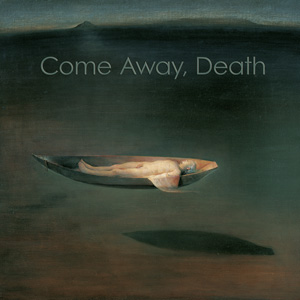 Do not be repelled by the album’s title or by the morbid picture on the front cover. This is not a gloomy collection of gruesome, death-obsessed music. This beautiful and diverse vocal music is, in particular, unified by reflections on death, the acknowledgement of its presence in – or after – our life. Only in the last song, Mussorgsky’s Field-Marshal, is Death openly terrifying.

The “golden thread” of this programme is Shakespeare’s poem Come Away, Death from The Twelfth Night. Out of more than twenty settings, three were chosen. All of them treat the text as a tragic renunciation – despite it being originally placed in the context of a merry comedy. These three short songs are like way-markers on the way through the album, separating three longer works.

The setting by Korngold opens proceedings. It is lyrical and almost operatic, with frequent switches between major and minor. The melody moves in slow, steady waves. The mood is close to Purcell’s Dido’s Lament: this is a calm acceptance of death, with bitter sorrow, but without protest. The setting by Sibelius is, I guess, in Swedish. It is stern and bare – the darkest of the three. The music conveys both dread and foreboding. Despite being very sparse, it leaves a feeling of heaviness, of a hard and cold tombstone. Finzi’s setting adopts the pace of a funeral cortege and the ceaseless slow swaying of a tolling bell. The melody is poignant, with distressing accents: here the hero is definitely not agreeing with his fate! This version is more theatrical, less personal than the other two: the music ascends like a thorn bird rising to the skies. It is also the most beautiful version, and the melody is haunting. It stayed with me for at least a fortnight.

Wolfgang Plagge set four poems by Edith Södergran. There is no explicit mention of death in the poems. However, they can be interpreted as pondering the subject. The music is boldly dissonant and creates a feeling of fragility and strength at the same time – as if depicting a strong yet emotional personality in deep depression. The accompaniment is sparse and effective. These settings succeed in their aim to “reproduce and reinforce both the ascetic and the uninhibited aspects of Södergran’s incomparable language”, as the composer strove to do. Although very modern, the music grips and enthralls with its interplay of white light and delicate glass, of cold rain and warm wind. The match with the words is tight and delicate. Kielland’s dark velvety voice brings the songs to life – frightening, poignant, stirring. This is a very memorable and beautiful work.

HVIL is described by its creators as “the Earth’s plea to humankind”. There is no translation, and there probably cannot be any, for the Earth is speaks an eerie language, whispering and shouting out words in clusters. If you know Norwegian (and Latin) you’ll probably be able to decipher those long long words; the rest of us will need a translation, which is absent. I understand that a detailed explanation is not feasible – still, I would have expected to receive a little more information. As it is, I can only speak about the effect of the sounds, without really understanding the meaning of the words. The effect is spectacular. The piano part lies in the lowest and highest registers. In between, the voice cries out: a desperate plea, dark and intense, and at the same time fragile. The voice jerks and thrashes about as if in fever. The music descends to the lowest reachable areas. Kielland is a marvel; her voice is powerful in all the registers, and she shows great affinity with the work. This is the most persuasive advocacy for the Earth’s plea: I don’t understand what the singer is saying, but I feel that I totally agree with her. The music is atonal: the Earth does not care about our ridiculous conventions.

The programme is closed by a strong, memorable performance of Mussorgsky’s Songs and Dances of Death. Grammatically, in the Russian language, Death is feminine. Thus a woman’s voice is more suitable here than the customary bass or bass-baritone: we hear Death speaking, not someone retelling her words. And among the female voices, the lower one surely has a better claim to the work, due to its darker connotations. So, Kielland is already in a good starting position – but a good start is not enough. What she does, how she sings, what she makes out of these songs, is absolutely awesome. Lullaby, this female counterpart to Erlkönig, is a gem of the musical theatre, and Kielland sculpts each word as if she lives it, with absolute identification in all roles. This is one of the cases where it is borne home to the listener that music is not just about accurate note-rendering. If you have children, by the end you’ll be half-dead yourself.

The text of the Serenade is rather verbose, without the dense action that we encounter in other three songs. Kielland compensates by giving us some magnificent opera singing. Her diction is very good, and the Russian pronunciation is praiseworthy. She conveys the feeling of restrained power, which finally uncovers itself in the explosion of the last notes. Trepak has the grim dare-devilry, which we know from some pages of Boris Godunov – especially the role of Varlaam and the Kromy scene. In the midst of the winds and blizzards whipped up by Osadchuk, Kielland sings with raw abandon. The ending is a soft consolation. The Field-Marshal puts a huge exclamation mark at the end of the recital. The images of the battlefield are shocking, and Death’s monologue is terrifying. Kielland’s voice is strong and cuts deep like a blade through butter. The ending is devastating.

Throughout the disc, the contribution of the pianist Sergej Osadchuk is invaluable. The power and expressiveness of his playing matches those of Marianne Beate Kielland’s singing. He has to handle difficult scores, and he does it boldly, yet his technique always serves dramatic purposes. In the liner-note, Kielland recounts the conception of the album. The works are described – by the creators where they are still living. We have bios of the performers, all this in English and Norwegian. Complete texts with English and Norwegian translations (where possible) are provided. As usual for this label, the recording quality is exemplary. I listened on an ordinary CD player, but even so I was amazed by the quality of the surround. If something can persuade me to buy a SACD player at last, it is this disc. I just want to hear what the “real thing” can be, if the plain-CD reduction has such a feeling of space and presence. Kielland’s voice is captured most vividly and is presented as if a shining gem on a velvet bed.

There are experiences in life that you remember, although they may not be pleasant. Some of them are musical. They make you think, maybe even change. They clean the pipes of your soul. This disc is one such experience: a work-out for the psyche. Our souls need exercising not less than our bodies do – especially in these times when we consume so much emotional junk food. And, just like the effort and the tension of sport the process does not necessarily induce an enjoyable feeling, but in the end you are glad you did it … and so it is here. Unless even the mention of Death is taboo for you, consider hearing this disc. There may be no joy in this enjoyment, but there is much beauty, sincerity and high art. This disc gave me one of the strongest musical experiences I have ever had.

This entry was posted in Come Away Death. Bookmark the permalink.