All Music At Once 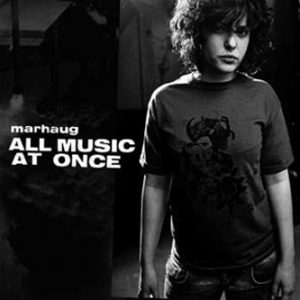 Smalltown: “For 20 years Norwegian sound wizard Lasse Marhaug has been one of the leading names of the noise scene. Marhaug has released more records than any other Norwegian artist, and through relentless touring across the world he is well established internationally. Marhaug has collaborated with artist like Kevin Drumm, Merzbow, Enslaved, Jim O’Rourke, Oren Ambarchi, John Wiese, Paal Nilssen-Love, Mats Gustafsson, Maja Ratkje, Ken Vandermark, Peter Rehberg, Otomo Yoshihide and Sunn0))). He doesn’t confine himself to the electronic/noise scene, but works with artists from the world of free jazz, extreme metal and new music also. Marhaug is known for his long-going project Jazkamer, of which Smalltown Superjazzz has released the main albums, like 2006’s ”Metal Music Machine”. In 2001 Smalltown Superjazzz released Marhaug’s ”Nothing But Sound From Now”; a ferocious mixture of digital overload and analogue electronics. In 2004 he returned with ”The Shape of Rock to Come” – which went on to be nominated for the Norwegian Grammy, and was included on the top 20 list of most imortant Norwegian albums of all times by the newspaper Dagsavisen. Internationally the album was met with equally positive reviews. It was a loud noise album, but with strong elements of rock and metal’s energy, as walls of guitar clashed against grinding electronics, and critics and audiences recognized it as special work in its field. Come 2010 and Marhaug is ready with his follow-up album for Smalltown; ”All Music At Once”. On this album he takes the rock/metal element one step further by using musicans instead of playing everything himself. ”All Music At Once” features Jon Wesseltoft (of black metal band Thorns) on guitar; Kevin Drumm on electronics; Maja Ratkje on growling; Hild Sofie Tafjord on horn; and Stian Westerhus (of Puma) on guitars. The use of musicans creates a richer sound, but the music of ”All Music At Once” is unmistakebly Marhaug; with dense blocks of sound slowly building towards cathartic climaxes. And as often characteristic with Marhaug’s music; in spite of the sonic violence there is strong sense of composition going on. Marhaug makes Noise Music, not just noise. Marhaug considers his recordings for Smalltown Superjazzz as his main solo albums, and it that sense ”All Music At Once” together with ”Nothing But Sound From Now” and ”The Shape of Rock to Come” creates a decade-long triptych of the mutated bastard that modern rock, metal and noise music has become. Heavy stuff.”

This entry was posted in Guest appearances. Bookmark the permalink.