It’s hard to imagine a better choice to remix Tormis’ music and Segakoor Noorus’s performance than Maja Ratkje. Ratkje, a multidisciplinary electro-acoustic composer/vocalist, is comfortable in the world of contemporary classical music, having delivered her own masterful River Mouth Echoes (Tzadik, 2008) and both composition and vocals to Norwegian accordionist Frode Haltli’s more folkloric but still far-reaching Passing Images (ECM, 2007). She’s also a founding member of the all-improv group Spunk, whose 2008 performance at Festival International Musique Actuelle Victoriaville was a highlight of the Canadian left-of-center festival. 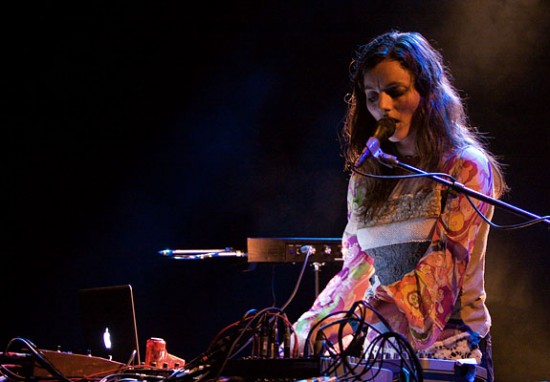 Unlike Sidsel Endresen, who works completely acoustically—though often finding herself in electronic environs through the company she keeps—Ratkje’s work involves extended vocal techniques, but also an extensive personal setup of computer, Theremin, sound processing and assorted other devices to create expansive sonic landscapes. Ratkje appeared, in fact, at Punkt 2009, on a double bill with Endresen, that brought into sharp contrast the two singers’ radically different —but unmistakably innovative and experimental—approaches to expanding the possibilities of the human voice.

And so, Ratkje’s remix of Tormis was a stunning example of remixing, reinterpreting and expanding upon source material from a considerably different space. It was also an early sign that Punkt 2010 was making some subtle changes to its Live Remix presentations in The Alpha Room. Rather than just a couple of small stands with red globe lights to provide the barest illumination, a combination of smoke and gently swirling lighting augmented Ratkje’s remix, not so strong as to be distracting from the laboratory work going on, but, instead, drawing the attention into it. Ratkje used snippets of the choir from various points throughout the performance, sometimes creating a lush backdrop of looping, over which she added her own voice, which ranged from pure and melodic to sharp punctuations, created with a small microphone that she actually, at times, kept inside her mouth. She used the airiness of breath, squeaks and squeals, and other unusual textures, sampling them on the fly, processing them, and adding them to an increasingly densifying mix; the volume, too, began to increase, with occasional gut-punching bass shots reaching almost ear-splitting levels.

Watching Ratkje manipulate sound was as impressive as watching Jan Bang do the same. With what looks like a mad scientist’s nightmare on a desk in front of her, Ratkje’s knowledge of every piece of gear, every device, was so thorough, so intimate, that she worked on an instinctive rather than intellectual level, manipulating her gear with the same natural ease that she manipulated her voice.

As capable as she was of vocal gymnastics, Ratkje never did anything without a purpose, as she pushed and pulled Tormis’ music into shapes the composer likely never could have conceived, but which he apparently loved, after it was over. The choir, too, could be seen in the packed Alpha Room, oftentimes appearing shocked and stunned at just how much Ratkje managed to be revere the performance and dispense with its orthodoxy. As the first remix of the evening, Ratkje set the bar incredibly high for what was to come. Fortunately, the rest of her Punkt mates were up to the challenge.

JOHN KELMAN, All About Jazz