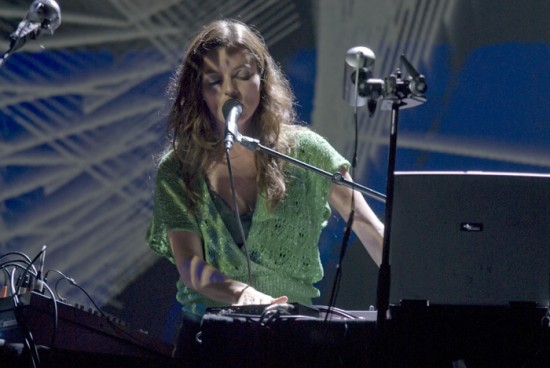 For its second double-bill of the evening, Punkt combined two vocalists, both tremendous innovators who work in the world of experimental electronic improvisation, but with a very key difference. Sidsel Endresen, truly one of the most imaginative singers around, relied on nothing more than her voice; Maja Ratkje, on the other hand, possesses a no less distinctive approach, but also utilizes a large array of computers, effects and sampling gear to create a much broader landscape.

Ratkje—a member of the free improvising unit Spunk and a respected composer of new music—is another vocal pathfinder, but in her case it’s a combination of extended vocal techniques and the kind of seamless use of electronics that allowed her to create a 30-minute continuous set with a remarkable arc. Contrasted with two small, square projection screens behind her, projecting images of Endresen singing, the set design for Ratkje was more expansive, with a full back-screen of shifting colors and images almost dwarfing Ratkje and her two tables of gear. 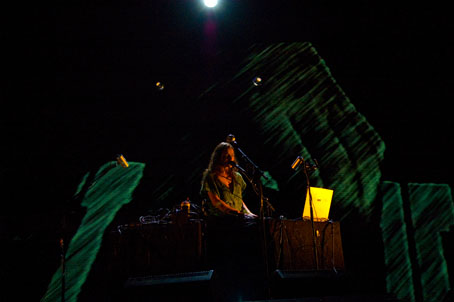 At one point a piano motif took shape behind her, with a huge hand striking keys as Ratkje took her own voice—which moved from melodic invention to unprecedented sonics, first, acoustically but then processed and used to shape a three-dimensional sound field—and gradually intensified the improv to the point where, near its end, she was screaming with near-reckless abandon. Still, as extreme as her music became, there was always a distinct sense of purpose as she moved around her effects and samplers to find, in real time, new ways to fashion her sound. The complexity of the technology appeared overwhelming, yet in Ratkje’s hands—much as is the case with Jan Bang, though she works with a much larger array—it was almost as if it was directly connected to her—another part of a larger instrument.

Because it’s all about seamless integration. Ratkje possesses no shortage of natural vocal ability, but it was her organic invention, as she turned her voice inside out electronically and, augmented with sampled sounds and even small bells used to create unexpected sounds for the imagination, that made her performance—and this inspired double-bill with Endresen—an early highlight of Punkt 2009.