The many sides of Maja Ratkje 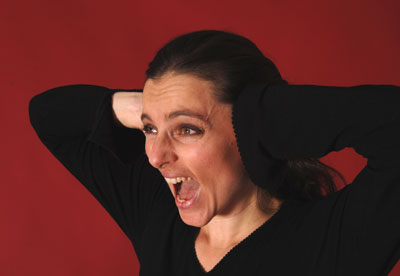 One of the things that’s made me such a huge fan of experimental Norwegian vocalist and composer Maja S.K. Ratkje is that she doesn’t subscribe to any kind of hierarchy concerning the various styles and approaches she deals with — she never expects to be congratulated for her broad-mindedness rather than her actual output. She makes no fuss about stretching out with traditional folk material one day and the next unleashing an avalanche of piercing electronic noise.

Ratkje’s recent River Mouth Echoes (Tzadik) covers a lot of terrain, focusing on her more serious compositional side with six pieces from 1997 through 2005. In her brief liner notes she writes, “Contrasts are essential; extremes and clear cuts. Music is a part of life and should sound like that. Noise and distortion have an unlimited earthly beauty, chaos and simplicity often appearing side by side, but also the romantic softness of quiet sine waves or melodic lines.” She goes on to emphasize the importance of context in how disparate sounds sit with one another.

Some pieces use generous amounts of improvisation and scalding noise–among them are the opening track, “Øx,” a duet with great saxophonist Rolf-Erik Nystrøm in which Ratkje is credited with “processing,” and the even more harrowing closer, “Sinus Seduction (Moods Two).” “Essential Extensions” is a rigorous, all-acoustic virtuoso piece, perfectly played by the trio Poing, longtime collaborators of Ratkje’s who’ve resituated the specialized language of free improvisation within composition. Ratkje’s displays her own astonishing extended vocal technique on the fluttery, spooky, and disarming “Wintergarden”; the title track, performed by a quartet of violists da gamba, is stark, dissonant chamber music; and the orchestral “Waves IIB” creates tension-stoking drama.

This entry was posted in on Maja in English, River Mouth Echoes. Bookmark the permalink.