A commission by SPUNK for the 40th anniversary of the Henie Onstad Art Centre. 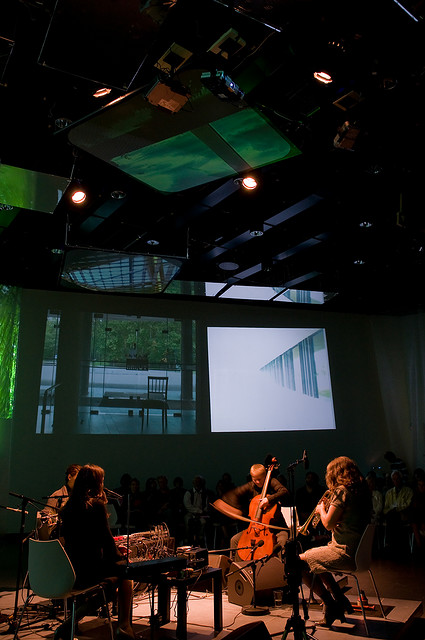 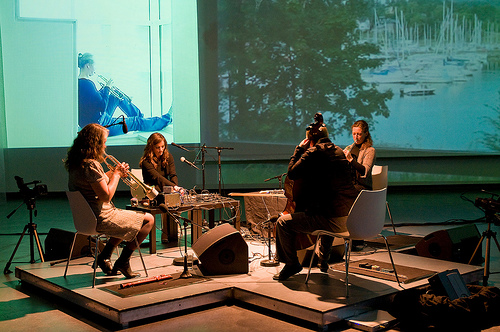 LIGHT is an interaction between the art centre’s environment and the musicians, in which, over a period of time, SPUNK takes possession of the space.  By focussing on the spatial quality of light, SPUNK makes a  reading of the building and its surroundings.

Each performer chooses a place in which to perform solo.  The sound of the four concerts will remain on site after the performance as traces only, whist images from the performances are projected into the concert space.  Alongside projected images of nature, and of the building seen through selected windows surfaces, these images will create a subjective visual representation of the art centre, which merges with that of the concert.  The room itself is customised by SPUNK with reflective panels and transparent layers, so that the fragments of film from the site are multiplied and overlapped.  This creates a spatial ambiguity –  not unlike that represented by windows themselves -, and a feeling of being engulfed by both the room and the sound.

SPUNK’s improvisation takes place ‘in the moment’, but at the same time the music creates a sense that this moment can expand, through its inextricable link to the space in which it takes place, as well as the time-span across which LYS has been developed.

This entry was posted in Multimedia/Installations, Staged work and tagged SPUNK. Bookmark the permalink.