All About Jazz. By JOHN KELMAN, Published: May 22, 2008. Photo Credit: Martin Morisette 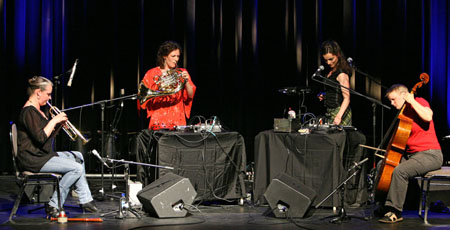 Free improvisation takes on many complexions, but amongst Norwegian groups like Supersilent and even the more extreme Ultralyd find ways to incorporate surprising beauty amongst greater extremes. The same goes for Rune Grammofon label-mates Spunk, an all-female collective that brings together unique instrumentation, a playfulness that transcends what is all-too-often far too serious music, and an ability to shape extended spontaneous creation (in the case of their FIMAV performance, an hour-long continuous set) into a moving stream-of-consciousness narrative.

Trumpeter Kristin Andersen (who also played recorder during portions of the performance) and cellist Lene Grenager are both strictly acoustic musicians though, with the variety of extended techniques both employ, they take their instruments to unexpected sonic territories. Grenager was particularly notable in her almost relentless pulse early on, a persistent harsh bowing that created a rhythmic foundation for a group that has no conventional rhythm instruments. She also created intense waves of sound, her left hand moving so fast at times as to be nearly invisible, while her right hand bowed the strings with across the entire dynamic spectrum.

Hild Sofie Tafjord’s French horn gives Spunk a distinct complexion; again, extended techniques created far broader textures than normally heard, not to mention that her horn is rarely heard in improvised settings. But as the more jagged abstraction of the opening part of the set gave way to greater space, it was Tafjord who created some of the loveliest melodies. With a twelve-year history, Spunk has evolved a deep chemistry, with Tafjord and Andersen often coming together in ways that might, under any other circumstances, be thought of as preplanned, making their spontaneous an in-the-moment interaction all the more remarkable.

Singer Maja Ratkje, known to ECM fans for her work on albums including accordionist Frode Haltli’s Passing Images (ECM, 2007), is also a renowned composer of contemporary classical composition. Here, however, with no roadmap whatsoever, her voice—another example of expanding a traditionally melodic instrument to more unpredictable places that included rapid-fire articulations, guttural gestures and sonics covering a surprisingly broad range— became another expansive part of Spunk’s collective aural landscapes: at times harsh and aggressive; at other times fragile, vulnerable and painfully beautiful. Ratkje also brought a collection of toys, tape recorders, other found sound objects and a theremin which she employed, sampled, processed and fed into Spunk’s soundscape with, at times, almost mischievous glee. This was a group that not only created distinctive and profound music, but clearly had fun while doing it.

In addition to Ratkje’s sonic manipulations, Tafjord also utilized electronics to expand the landscape. Spunk was capable of creating powerfully dense and challenging music; but so, too, was it capable of haunting lyricism and elegant simplicity. All too often free improvisation eschews melodism, and equally all too often fans seem to believe that discernible melody has no part in it. But the best music, as in the best lives, is all about confluence and contrast; pain and pleasure; harsh and beautiful. Spunk manages to bring together all these elements, making their performance one of the highlights of FIMAV 2008 and, quite possibly, the best show of the festival.

This entry was posted in SPUNK and tagged SPUNK. Bookmark the permalink.