Music is the sound of every thing 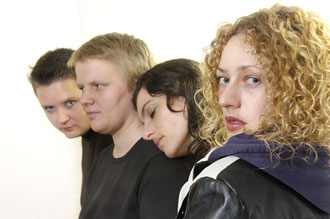 -SPUNK’s greatest asset is that we have passed the test: We are not affected by trends. SPUNK is a “stayer”; we’re contemplating setting up a SPUNK retirement home where we can make noise by banging our crutches against heaters.

SPUNK consists of four girls who met while studying at the Norwegian academy of music. Hild Sofie Tafjord, Kristin Andresen, Lene Grenager and Maja Solveig Kjelstrup Ratkje had no concrete plans apart from having fun when they formed the band. They threw away all norms and musical dogma to create a melange of laughter, wonder and ear-abuse. Sometimes SPUNK is a wall of noise, other times beautiful melodies, and most often it is beyond description.

-When we started not many were into improvisation in Norway, and those who were mostly belonged to the jazz category, the girls relate. But we wanted to break free of genres and styles of expression, we wanted to create something completely new, something we did not yet know what was.

One of the tracks on the band’s latest album is entitled “If a hedge trimmer was allowed to sing”. In the world of SPUNK all objects are instruments. Hairdryers, waffle irons and chains have been used.

-But it was mostly in the beginning that we are up to that sort of thing. We’ve later discovered alternative ways of playing actual instruments, ways that make the instrument extend itself.

What is the most incongruous thing you’ve done in this respect?

-Probably at one of our first performances, when we where making waffles on stage to the sound of a typical female “domestic conversation” about curtains that we’d pitched down so it sounded like male voices.

-Another bizarre incident was when Maja was looking for a special sound and found it when she banged the lid of a wok to her head, Kristin relates.

What’s it like being girls in an environment dominated by men?

-We don’t really notice that, says Grenager. Sometimes the technicians are initially a little sceptical, but they soon discover that we are professionals.

-I’ve had questions whether it is really true that we’re all girls in SPUNK, says Maja, and I guess that says something about how unusual it is.

-I’d like to say democratic if you let expand says Lene: All minorities are represented in SPUNK. We’re allowed to be exactly who we are. There is no censorship; multiplicity instead!

-And this is something we’ve strived for too, interjects Hild. And so we’ve overcome our differences and troubles, and are still playing together.

-Yes, but you should have seen their faces when I showed up in the studio with my recorder (flute). They looked flabbergasted, but the recorder stayed!

-Different personalities and different preferences, which have many intersecting points and cross-connections, means that we are constantly in development, and that the music never stagnates, says Maja.

How does improvisation work in practice?

-It is wholly liberal. Just as one does not plan a conversation with friends, we always start from nil, from which we can then go anywhere, says Lene

-Our ears are open for nuances. In the beginning we developed frames for the improvisation; that we would start languidly and then increase the tempo e.g. -Or we would come up with a phrase such as “spaghetti with custard”, and then play the phrase. It is about finding a common language.

The important energy in the audience.

SPUNK’s experience is that their audiences have become more receptive towards improvised music over the years.

-The audience will enter into a modus of communication with us. And improvisation is a totality of aural and visual aspects –the audience cannot be left only to listen, they must also be able to see how the sounds are created, Hild says.

Do you feel that people understand your music?

-There is noting to understand, is Kristin’s swift reply.

-It is more about experiencing. Those who don’t understand are those who try to understand.

-Well said! In fact it’s quite a paradox to review such music, says Maja.

-I think many people experience SPUNK as elusive and difficult to categorize. But we are not interested in being show-off improvisers. In this respect we are hardly the favourite band of other musicians.

-Since SPUNK is difficult to pin down, this also means that we fit-in in diverse settings. We seek out other venues than the obvious ones –We’ve played rock clubs, beer parlours and all kinds of places where we actually fit in because we’re non-dogmatic, says Maja.

-When we’re sad we fall between all chairs, when we’re happy we fit in everywhere, laughs Kristin.

This entry was posted in Interviews in English and tagged SPUNK. Bookmark the permalink.