POING and Maja Ratkje in Washington 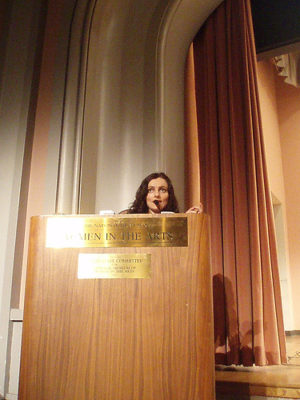 Today I went to the National Museum of Women in the Arts, which I never knew existed until now, for a performance by Norweigian vocalist/composer/improvisor Maja Ratkje, alongside the accordion/sax/bass trio POING. I went with a friend who I found out has been involved in some “new music” ensembles and is probably the only person I know that I can invite to stuff like this.

Ratkje is probably most known for her electronic noise-improv with groups like Fe-mail, but here we were treated to her more “classical” ouevre — although none of what was played had much to do at all with canonical Western classicism. I went in to this not knowing at all what to expect, other than that Jeff Bagato had called it “an essential event” on various DC announcement lists. Also, a recent show in New York got a rave review on the avant-progressive list.

What we got at this show were five pieces of wide diversity. POING kicked things off with a Ratkje piece inspired by the fifth movement of Messiaen’s “Quartet for the End of Time.” This was followed by “Passing Images,” an extremely minimalistic piece originally composed for solo accordion, and a re-envisioning of an already re-envisioned Norgweigian folk tune. Silence was a fifth instrument in this piece, and the ensemble manipulated it masterfully to create a work that, even though it was slower than the slowest slowcore band, filled the venue with a palpable tension that had me riveted. It didn’t have the same effect on everyone though, as someone in the audience could be heard softly snoring as the piece came to a close. The above-linked review from avant-progressive describes this piece better than I could, so here’s the relevant excerpt:

Passing Images was written as a solo for accordionist Frode Haltli freely from Maja’s memory of his re-arrangement of a Norwegian folk tune, “as a remote echo of something that has already been treated and changed”. Here it is yet re-arranged for the entire trio plus the composer’s voice. Once again we have the sound of air in the bellows or through the brass tube of the sax, devoid of pitch, barely audible bass harmonics, long silences, dramatic interjections from the accordion, then Maja entering with a babble of sound poetry followed by long pure tones alternating with small mouth sounds made audible by amplification; a totally gripping piece of music. It put me in mind of some of the artists pursuing so called lowercase improvisation, using their instruments in ways which strip them of all their traditional expressive qualities. That this was a scored work rather than improvisation may or may not account for its greater emotional power. A version of Passing Images will appear on Frode’s CD slated for release on ECM in 2007.

The only piece these musicians performed that was not composed by Ratkje was a composition apparently written by Terry Riley for Sonny Rollins (???), but maybe I heard that wrong. This one was the most accessible, with a relatively approachable if constantly shifting rhythm. Closing out the set was a nearly 20-minute “overture” for an opera that Ratkje wrote, which involved some pretty nifty pre-recorded bits played back on three separate cassette players and featured Ratkje’s voice more prominently than the other compositions.

Worthy of mention are all of the individual players, who played with all sorts of unconventional techniques, many of them percussive (I’m surprised, in retrospect, that I had never seen anyone play a bass with a mallet before today). Ratkje’s vocals were like Iva Bittová on a bad acip trip: squeaking, muttering, yammering away in a style that reminded me very strongly of the kind of vocal improvisation that Emily Hay does on her album Like Minds, or for that matter the stuff that Dagmar Krause does to open the first News From Babel album.

After this concert Steve Feigenbaum told me that it was perhaps the show he hated most this year, and that’s saying something given that he’s been to somewhere near 60 concerts in 2006. I had a different take, though; I quite enjoyed everything they played, although I refrained from purchasing any of the many CDs that were on sale because I’m not sure I could take this stuff on record. As it was, seeing it live transfixed me, but it was also a pretty exhausting experience.

This entry was posted in with POING and tagged with POING. Bookmark the permalink.