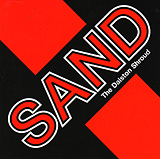 Soul Jazz Records: “Influenced by the New York Art/Punk scene of Sonic Youth, The Swans, Liquid Liquid, this is the group’s follow up to “Still Born Alive” (Soul Jazz Records, 2003) and ‘Beautiful People are Evil’ (Soul Jazz Records, 2001). This new album brings in a number of guest vocalists – Norwegian experimantalist artist/singer Maja Solveig Kjelstrup Ratkje as well as Austrian cabaret singer Louie Austen (Kitty Yo Records) who provides a chilling vocal on the Patrick Pulsinger produced “Doctor Crop”. Sand have performed onstage accompanied by cows and sheep for the Japanese Ballet troupe Karas. They have also performed at the Vienna Opera House alongside techno guru Patrick Pulsinger In 2005 they composed and performed a new soundtrack to the Tarkovsky film “Stalker” at the ICA as well as toured cinemas with a series of specially comissioned work from video artists. This new album was recorded in Paris, Tokyo, Vienna and York in 2006.”

Released as CD or vinyl

“Who knew that Soul Jazz—esteemed for repackaging everything from early-’80s NYC no-wave to NOLA’s prime ’70s cissy struts to Sir Coxsone Dodd’s Saragossa-Sea-deep Studio One tape archives—released music from the 21st century? Sand, a British quintet in their stable, is already three albums in, and their latest, The Dalston Shroud, is the first to not feature some sort of hazmat/gas mask cover-art motif. Instead, we have a red on black simplicity that’s explicitly Kadinsky (or wait, is that Stendahl?) that only hints at the New York noise within—the group is sonically in debt not just to Sonic Youth but to Swans too. They evoke the classic Cold War, as the group is also down with the Russian avant-garde, having recently provided a live score for Andrei Tarkovsky’s three-hour opus, Stalker. Darkly instrumental, here they get vocal contributions to cut through their fuliginous smoke. Crooner Louie Austen appears on one track, but a third of the disc features Norwegian tongue-wagging experimentalist Maja Solveig Kjelstrup Ratkje. Over the Moog and trombone tar pits of “Lal K,” she backmasks her fricatives as if in David Lynch’s Black Lodge (dig the red curtains there). It bubbles and toils slowly, but it’s worth the six-minute wade to get to the pestilential breakdown in its final two minutes. Now content to buzz like Yoko Ono’s “Fly” on a hovercraft, Sand’s gluey black monstrosity heaves and achieves a queasy sort of lift.” Andy Beta, Paper Thin Walls

This entry was posted in Guest appearances and tagged vinyl. Bookmark the permalink.