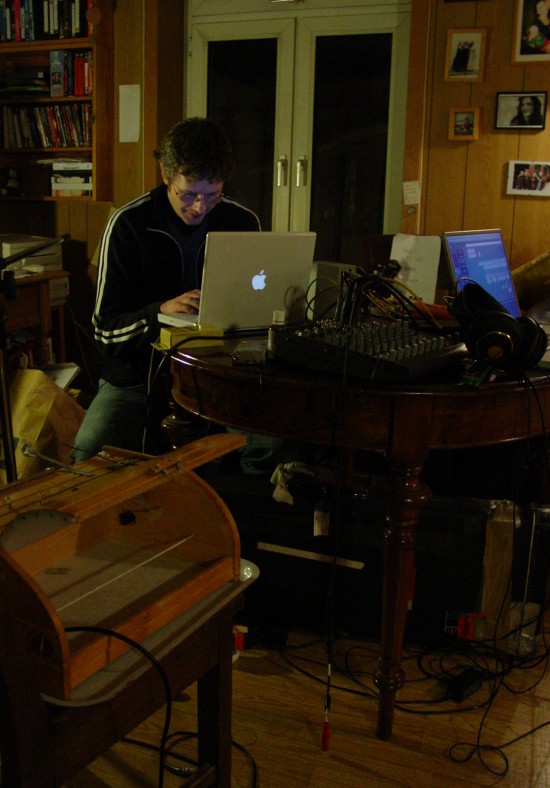 Vital Weekly: “Yeah, right, a album of ballads by these two renowned noise artists? Hegre, member of Jazzkammer and The Golden Serenades among others and Ratkje of Fe-Mail as-well as a bunch of improvised music projects, doing an album of ballads? Yes, it’s true and it’s great. They carefully play acoustic objects and hardly use any electronics. Sometimes the elements are looped, forming a block of repetitive sound, sometimes there is a far away sound of sound processing. But that is far away, almost hidden in the mix. Soft electro-acoustic music, crafted into songs, rather than lengthy improvisations. It’s already beautiful material, but the best is saved to the end: ‘Hammock Moods’ has a looped guitar, loose sounds but every once in a while there is a soft melody in the background, which even might be called romantic. An almost epic piece, which alone would be the reason to get this album. This is noise with the big N, and this is the future of noise music. Excellent!” (FdW)

The Wire, issue 267, May 2006: “John Hegre is one half of the Norwegian noise duo Jazzkammer and Maja Solveig Kjelstrup Ratkje is a free Improv vocalist in the Maggie Nicols tradition, as well as a member of both SPUNK and Fe-mail. That said, much of Ballads defies expectations. More often than not it’s a quiet and rather delicate affair, involving acoustic instruments, soft loops of noise, tick tock rhythms and pattering percussion. Voice is rarely heard. Most of the tracks are brief and enigmatic, involving repetitive patterns and copious periods of silence. “Binoculars And Traces” glides on softly undulating waves of feedback and slips into mostly low key activity during its second half, and “Private Matter” is a noise cut-up involving fragments of speaking voice in its earliest stages. Who does what is left entirely to the listener’s imagination. Though the CD’s eight tracks were probably all improvised, I suspect there has been some judicious post-production shaping of the material. Irony plays a part too. “A Quiet Day At The Office” is busy but without producing anything concrete, and “Art Compass” gives no clear sense of direction. The lengthy concluding track, “Hammock Moods”, in which Ratkje occasionally hums as if to herself, is intriguingly eventless, drifting along on repetitively fractured guitar phrases, chords and occasional pedal swells, casually moving from one intangible moment to the next.” (Brian Marley)

The Wire, issue 278: “Norwegian noiseniks John Hegre and Maja Ratkje are best known for the blitzkrieg of Jazzkammer (Hegre’s duo with Lasse Marhaug) and Fe-Mail (Ratkje’s duo with Hild Sofie Tafjord), but Ballads finds them in more contemplative mood. The opening “Autumn Leaves” has nothing to do with the Jacques Prévert/Johnny Mercer chestnut, but its seemingly unrelated elements – brittle shards of guitar, sprinkles of static drizzle, the clickety-clack of what sounds like a plastic toy – are carefully arranged according to a logic not far removed from the traditional strophic structures hinted at by the album title. Not so much ballads as something of the idea of the feeling of ballads, to misquote Robert Ashley. Ratkje’s forlorn vocalisations on “Blues For Silent Bakers” and the closing “Hammock Moods” sound more like her Finnish free folk cousins Jonna Karanka and Laura Naukarrinen. This latter track is the longest and most satisfying piece on offer, with Ratkje’s gentle sighs, Hegre’s psychedelic guitar curls, clicks and clangs coming together into something that for once is greater than the sum of its parts.” (Dan Warburton)

Cyclic Defrost: “Far in the artic circle, the Nordic noise and improv scene has produced some impressively divergent sounds over recent years – sounds that reflect very much on the nature of the landscape, the lack or overabundance of light during various parts of the year and other factors orbiting these two issues. Here, Hegre (of Jazzkammer fame) and Ratkje (best known as one half of fe:mail) team up to explore the more gentle and sparse sides of their musical interests. Thankfully steering clear of the expected turf of outright blasts of noise and sonic debris, the pair realise a wonderfully open and personal vision of what the title ‘Ballds’ may suggest. Open passages of melodic guitar are washed out, hung and dried, then mixed together via gentle but firm dsp. The results are both highly listenable and remarkably individual. Looping tones interlock in unexpected ways, fragments of kalimba poke through and strummed notes float above gritty handmade percussion. Here lies a wonderful exercise in the finer edge of Nordic noise music.” (Lawrence English)

Cracked: “If you have ever talked to John Hegre you will know that he has the uncanny ability to concentrate on various things at the same time, making it hard to follow him at times, especially when he lets his imagination run on, but nevertheless he is able to focus closely at whatever it is before him at the time. Expansion and concentration is also the centre of this collaboration with fellow Norwegian Maja Ratkje whose result might come as a surprise to listeners used to Hegre’s more noisier side of music (from his solowork to whatever Jazkamer is doing at the moment, like that “metal machine music” album). But then again, as I have mentioned, nothing should ever surprise you. “Ballads” for the two exceptional artists means slow songs as in stripped to the bare essentials and then set together a new and does not necessarily mean singing as in vocals. By de(con)structing songs to their basic cores and laying bare their innermost structures as well as sounds, Hegre and Ratkje go further than most other artists have gone in this field, without losing the song-like basis. Even if all that is left is a touch point of felt imagination of sound. There are vocals on here, sometimes hidden, sometimes more openly, but always deconstructed as well to their most basic and inner atom, which – as it turns out – is breath (“binoculars and traces”). An interesting point to remember is, though, that whatever instrument you use to get into the atomic structure of things will leave their mark and influence the result. As in an EEG of the brain or an electromicroscopic picture of whatever, the result you get into your hands is interesting, mesmerizing even, but it is stil just a reproduction of the real thing and therefore an interpretation. The variety is also sharp and distinctive. From the beginning “autumn leaves” which has Derek Bailey-like acoustic guitar plucking meet some household equipments (scissors? Fotographic camera) as percussions, to the transcending, luminizing “hammock moods” at the end of the album, the sounds are sparse but well picked and set to an atmosphere of exploration into the microscopic aspects of sounds as well as songs. Here and there droning noise or piercing interferences will hit your ears but overall the atmosphere is not as much concerned about the noise but about the spaces in between and the way that single sounds influences them. The sounds instruments make that are not part of their intended spectrum (and usually tried to be erased with complicated and elaborate computer software) are mixed into the foreground as are some bitparts and leftovers of dialogue and field recordings. The latter intentionally spritzed over the record as if left in the master tapes by accident – only that the track “hesitating interruptions” gives it away, by being nothing but leftovers with silence in between. How far can you go with this thing? I mean, where does it all end? What are the tiniest pieces of music and how will you be able to arrange them into a structure that still shows their connection to the full body of sounds that is a song? Somehow, I get the feeling, that the other way around makes sense from a viewpoint of tradition, for songs being made of single parts and the single parts – like atoms – making up the resulting piece of matter. But what if Hegre and Ratkje are right and it is not the atom (or whatever core physics have found as the tiniest matter particle right now) are the central point of existence but the larger structure? We will have to turn around our current social viepoint of obeying scientific research and turn to where exactly? Wouldn’t searching for the ultimate meaning not in the microscopic but the macroscopic, e.g. turning from the tinies dimensions to the biggest ones, be the same thing as before only the other way around? Is humankind doomed to repeat its mistakes over and over again? A lot of questions, whose answers won’t be found on any record, but the root to ask them is written all over here.”

This entry was posted in Ballads. Bookmark the permalink.