This text was originally written for the program booklet for the dance performance Adventura anatomica which was premiered in Oslo Nov. 17th 2005 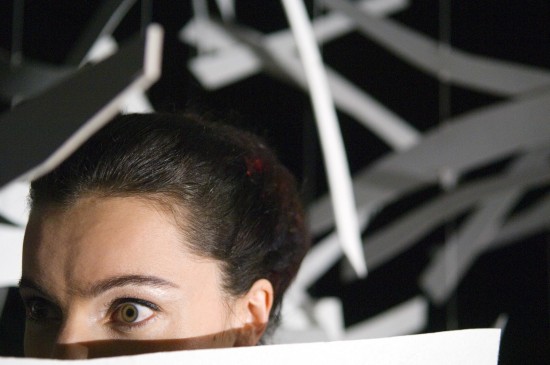 Let us say that the artistic creative process is a movement that starts when an idea is conceived and acquires an end point in the moment when the movement has an affect on a receiver. The French philosopher Henri Bergson 1) would have called the idea phase an intuitive, experiential state: In short, a state where consciousness is mobilized, and where the term intuition describes a level of consciousness that exceeds all forms of conceptual knowledge.

While the intellect is connected to a spatial view of reality with seconds and minutes and conceptual categories, intuition is connected to reality in what Bergson calls duration. Here lies the key to understanding reality: that all change (movement) in time and space must be understood as a whole. A movement, an auditory action and a bodily response comprise one entity, one duration, which when it unfolds creates time and space.

Sound and bodily movement can together create duration but music is also a movement in itself. When the sound unfolds in space it is just as real as a visual action. The idea of disengaging music from movement is just as impossible as measuring experienced time in minutes and seconds.

Neither is it possible to grasp the underlying intuition through concrete action. If to compose is to intuit, intuition is in turn something infinitely simple that shirks all attempts at recording it. Intuition is a form of duration, according to Bergson; in the moment it is written down or put into action it meets with duration’s spatial opposite: materiality. But the meeting in space is necessary in order for the artistic intuition to unfold.

In space the ideas between those trying to create something together are exchanged and in the next round the process of creation is passed on with and in the listener, viewer, the audience so that the movement in fact continues. One can thereby say that although space on the one hand empties the action of its original, intuitive contents, the same space is the point of departure for recovering the intuitive level. The artwork’s meeting with the audience takes place through mutual communication.

All art forms require communication at several levels simultaneously. One level of communication is the action in space that is experienced by all present. The process of movement is carried on in the receiver and refers back to – and affects – the original idea. A performer must be extremely sensitive to what takes place in the meeting with the audience. Another level is the communication between those who attempt to create something together on the basis of a shared feeling about an idea. This communication is much more dependent upon the individual than upon competence. A musician can, in creative terms, have more in common with a dancer or pictorial artist than with another musician or composer.

In meeting with other creative artists one’s own choices and preferences undergo constant revision, which is invaluable for artistic development and in a broader sense also for personal development and for understanding reality. It requires also communication at the most personal level; one’s own process takes place on a subtle level where the first creative ideas find expression in all their incomprehensibility. The sum total of all experience is an immeasurable stream, which flows in and between simultaneous throbs of consciousness undergoing constant change. That which is created or experienced in the moment will be understood through what we have already seen and heard. What is experienced is unique for each person participating in what we create together, in this space, in our shared experience of now!

Translated from Norwegian by Diane Oatley.

This entry was posted in by Maja in English. Bookmark the permalink.