2xCD. Asphodel: “Fe-mail, MAJA RATKJE and HILD SOFIE TAFJORD, have crafted a site-specific survey of the chaparrals of noise music. As half of the Scandinavian female improv quartet, SPUNK, they began to adapt their mediums of french horn and voice to multiple formats for musical arrangements. In working for film, installation, studio, and performance they began to evolve their musical process to a compulsive physical act, opposing their standards.

Exposure to distorted live sampling and field recordings allowed MAJA and HILD to grab the limit and make it their instrument. Through synched communication and developed improvisation, their project further evolved into their newest release for Asphodel, Blixter Toad. This two disc set is best described as the taxonomic designation of feminine conviction through gadgetry and acoustic archaeology. Two embryonic visual studies (videos) by MASAKO TANAKA are included, featuring shot surveillance from the live sessions for the recording of Blixter Toad. 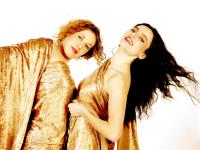 The chromatic genus of the species call is best known by its vocal sac that blows up like a balloon and bellows “scheweeeeeeeee” riffs. Their cut up crescendos of piercing frequencies appear like rattle snakes you find under the rocks, as you search for a jewel-encrusted music box, unsure if they’ll poison you or cure you. A voice screams like an effected guitar in the distance, reminding you to come home from the thicket before the animals become more aggressive. Blixter Toad’s final track coalesces into the Sunday morning dew collecting on the surface of FE-MAIL’S electro-acoustic lily-pads.”

Finnish artist Pirjetta Brander has made a video to the track Pretty Ugly Song, available here.

Another amazing video, made by Liselotte Wajstedt to the track Rockabilly (not included on the album):