The Wire, Oct 2006: “Norwegian vocalist Maja Solveig Kjelstrup Ratkje is, to say the least, a busy woman. Her Pippi Longstocking-inspired Improv quartet Spunk are currently celebrating their tenth anniversary, while her noise duo with Hild Sofie Tafjord (also of Spunk) have been laying waste to concert halls far and wide for the last couple of years. Added to this, a vast number of collaborative releases with artists as diverse as Dutch sound poet Jaap Blonk and her frequently fearsome noise compatriots Jazzkammer, not to mention her work as a composer – which was in fact her first discipline – and it’s clear that Ratkje is giving new meaning to the term ‘driven’. It’s somewhat surprising, then, that Adventura Anatomica is only her third solo album; in fact even this new release is the product of a live collaboration with dancer/choreographer Odd Johan Fritzøe. Her first solo album, Voice (Rune Grammofon 2002), showcased her extraordinary vocal methodology, literally a whisper-to-a-scream approach that ranged from Diamanda Galás-style imperiousness to a childlike fragility reminiscent of Joanna Newsom, via the dada-inspired absurdities of Phil Minton. This new album arrives hot on the heels of this year’s Stalker LP, on Important, and a run of recent solo shows in which her command of a small arsenal of electronic devices has been as impressive as her vocal technique. Ratkje may be focusing more strongly on technology with her recent material, but she’s no slave to it; the simple dictaphone remains one of her favourite musical tools even as she deploys a sophisticated live sampling system alongside it.

Adventura Anatomica is clearly inspired by folk tales and fairy stories, and it deals with how sound can take on the characteristics of narrative. The album opens with two pieces – “Ground Creature” and the wonderfully titled “Bark Up A Tree And Get Leaves In Your Mouth” – which have the sparseness and delicacy of this year’s Ballads collaboration with Jazzkammer’s John Hegre. Protracted silences are broken up with tiny lip smacks and squeaks. Here, and on “Too Many Trees”, Ratkje sounds like a child exploring sound for the very first time, or perhaps trying to reassure herself that she is a manifest presence in a new and unfamiliar environment. What makes these moments so fascinating is the fact that both the alien, unsettling atmosphere and the sounds of a central protagonist reacting to it are one and the same. This emphasises the strong connection between mythic archetypes and the individual subconscious in a startlingly effective way. It’s an approach that reaches a deeply disturbing climax on “The Wolf”. The piece begins as simple sonic illustration, with Ratkje’s snarl sounding like it was recorded by placing contact mics in the animal’s jaws. But as the piece gains density, a terrifying tension is created. It’s not the fact that the piece may or may not be depicting an act of horrific violence; it’s the confusion created by the fact that all the sound comes from the same (human) source. The listener is assaulted by the noise – and it is by some margin the album’s most ferocious passage, matching the power of her various summit meetings with Lasse Marhaug, such as 2004’s Music For Loving, but also somehow implicated in the attack.

But that’s not to suggest that Adventura Anatomica is a dry, purely conceptual piece. Anyone know what a superb musician she is, and one who can genuinely be said to be extending the expressive range of the voice through technical and technological means. Her interest in the cadences of language pays rich dividends on ”The Red Hooded Lady Of The Woods”, where she mimics the exaggerated intonation of a children’s storyteller, heightening it by layering, looping and filtering, and creating its own soundtrack by electronically manipulating the sibilants to sound like woodland birds and insects. “Floating, Hiding, Posing” shows how she is able to evoke complex emotional states by careful placement of sounds from a huge palette of extended vocal techniques. Meanwhile “Once Upon A Time” and “Woods Have Ears”, which feature fragile, barely-there wisps of processed harmonica and flute rather than voice, are quietly gorgeous breaks in the tension. Ratkje’s work can be seen as an invitation to the listener to seek out the music that lurks within the noise. There’s never a sense that her intentions are transgressive, a sadistic attack on culture and the petty concerns of a bourgeois audience who are viewed with pity and contempt. Instead her work is celebratory and inclusive, an energising rallying call to those who are curious enough to peek out from behind the curtain of mainstream mediocrity. Adventura Anatomica is not a summation of her work thus far – she’s far too restless an artist for that. It’s rather the latest brushstroke on the canvas of an oeuvre that becomes more impressive with each release.”
Keith Moliné 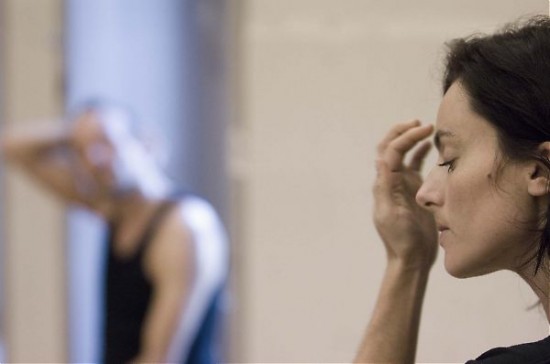 Pitchfork, jan. 2007: “Adventura Anatomica documents a live performance by Norwegian singer, composer, and sound artist Maja Ratkje. On a minimally appointed stage with dancers and hanging, two-dimensional birdlike constructions, Ratkje used a homemade sampling tool called ImproSculpt, harmonica, flute, some metal objects, and a vast array of vocal and bodily noises to craft this abstruse yet engrossing sound collage. I’m rushing through these preliminary details because they have little to do with the actual experience of listening to this record. By the fourth track, Adventura Anatomica seals you in so completely that it nearly blots out everything but the music itself, including the details of its creation. This isn’t to say that what Ratkje does here lacks exterior points of reference. The Italian futurist Marinetti laid the groundwork for this type of sound art with his seminal “sound poem” Zang Tumb Tumb. Rich with inventive typography and onomatopoeias, it inspired Luigi Russolo to start building his noise machines. Kurt Schwitters’ recorded sound poem, Ursonate, which Adventura Anatomica resembles, is another clear precursor to Ratkje’s preference for deranged vocal sound effects to more traditional intonations. We tend to expect experimental musicians to break the mold with every effort while allowing rockers and rappers to rehearse the same idiom over and over. The vitality of Ratkje’s album reveals the flaw in this thinking. Far from sounding like a derivation of the fine company it keeps, Adventura Anatomica is a singular experience. It’s possible to map the terrain: the first two tracks are comprised of little more than sucking, clicking, and dragging noises scattered judiciously across a vast field of silence. As the album eventually shapes up into something like a postmodern play about fairy tales, these opening tracks are the sound of the forest set being wheeled onto the stage. On “The Red Hooded Lady of the Woods”, the rising action begins in earnest: With the words “Once upon a time,” an increasing chorus of Ratkjes gradually weaves an overlapping litany into a nest of shadowy whispers. “Too Many Trees” is as claustrophobic as its title suggests, an intensifying nightmare amalgamation of hoarse murmurs, snorts, cackles, and chirps, as saturated as the early tracks are desiccated. “Once Upon a Time” grants us a respite with its eerie yet serene drones, while “Floating, Hiding, Posing” blends an angelic warble into a noise explosion where Ratkje beatboxes strident, concussive vocal tones that flutter and careen like bats. On “The Wolf”, she somehow makes herself sound like a vacuum cleaner battling a squeaky rubber balloon. So, as I said, it is possible to map Adventura Anatomica. More difficult is figuring out what it’s a cartography of, once all the constituent parts are assembled. Certainly, this record is about fairy tales. The imagery of trees, woods, and red hoods are a dead giveaway and the album’s sense of perpetual wonder at the mundane is commensurate with fairy tales’ unique logic. But it’s also about the body. Listening to the record, you become aware of the body as a phenomenal sound source, suddenly noticing the musical potential of your gurgling stomach, the blood squeaking in your ears, your knuckles popping. But Adventura Anatomica transcends about; it constructs a conceptual space you enter into, and the question remains: Where are we, when we’re in here? The album cover contains a clue: It’s a close-up of Ratkje’s face, pale amid dark hair, eyes shining like portals into an utterly interior space.”
Brian Howe

Boomkat: “It’s not like I haven’t heard a lot of experimental music, but Ratkje’s choices and processing techniques set her apart from pretty much anyone else i can think of. Some of you may have picked up her albums on the Rune Grammofon label, those were a good example of her sound, but on ‘Adventura Anatomica’ she takes it to the next level entirely. Apparently the work was created as the soundtrack to a piece of theatre, the soundtrack to a fairytale world of woods, wolves and witches and surprisingly this comes off pretty effectively. Ratkje’s incessant scrapes and creaks eventually turn into tortured moans and wails before transforming entirely into animal cries and then piercing noise detailing a perfectly realised narrative. Extremely strange music and not for the faint hearted, but very good and very brave indeed.”

Vital Weekly: “(…)The voice is her primary instrument, in conjunction with a live sampling instrument called ImproSculpt, but also harmonica, whistling, flute, metal objects, dictaphone and in this case also the sound of the dancer’s body.(…) Sometimes dreamy and indeed fairy-tale like, sometimes however the nightmare version thereof, but things end well. It’s a good solid CD of experimental music (…)” FdW

This entry was posted in Adventura Anatomica. Bookmark the permalink.