The final weekend of this year’s Bath Festival was devoted to cutting-edge electronica, a bold move away from the Festival’s focus on classical and jazz. The climax was an explosive double-bill from Norwegian noise and dance trio Agrare, and the unclassifiable vocal talents of Jamie Lidell.

Where so many electronic acts have themselves hidden behind ranks of laptops and screens, both Agrare and Lidell make their bodies the focus of their performance. Agrare’s set – featuring Maja Ratkje on vocals, Hild Tafjord on French horn, and Swedish dancer Lotta Melin – explored the boundaries between sound and movement. Their set began with ethereal vocal warblings from Ratkje, accompanied by the gurglings of Tafjord’s horn. Dressed in white shirts and ties, the players created a dialogue with Melin’s strange choreographic semaphore. But during their 40-minute set – really a single, sweeping improvisation – the distinctions between singing and playing became almost meaningless, since Melin was as much a musician as a dancer, with a long solo for theremin, and Ratkje’s impish movements were visually arresting. There were some nifty visual projections too, from cameras hidden inside microphones and among the instruments, but it was the enormous dramatic variety of Agrare, from tiny, tinkling delicacy to epic, thundering soundscapes, that really caught the imagination. 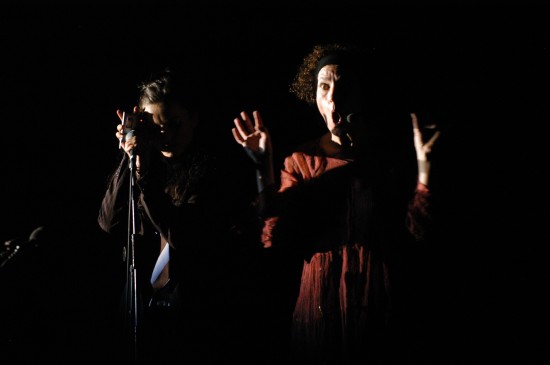 This entry was posted in Other staged works/installations and tagged Agrare. Bookmark the permalink.