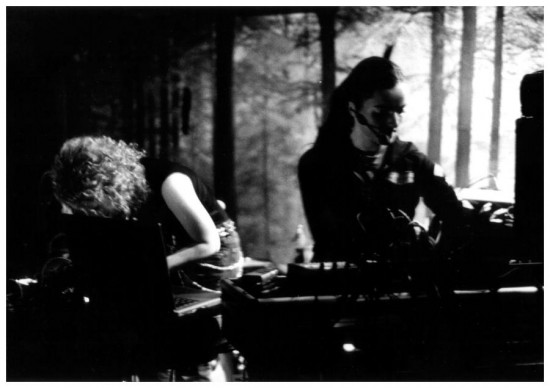 KFJC 89.7 FM: “I’m on a major Maja mission. Maja Ratkje along with her Fe-Mail partner, Hild Sofie Tafjord are also in SPUNK; a Rune Grammofon bit of SPUNK is in the KFJC pipes right now along with a beauty of a solo picture disk. This is “surf noise”, agressive waves of sound crash splashly but somehow Maja’s soothing voice manages to stay afloat atop those waves (even when her modified voice is churning the selfsame waters.) This CD is every bit as weird and wooly as the frog-women photos with their turtlenecks taking over, it sounds like playtime in the laboratory. Science is fun, and it can include harmonicas with the harm. (See “After the Rain”) A key to the Fe-Mail mystique is how they sucker punch you with their noise; this is not a constant testosterone-torn hole in your ear, it’s a series of perforations, leavened with toy piano, marshy mucking and decoy duck honking, gossaper sustained whispers (check “Ballad”). Fe-mail coddles you with maternal bliss, but later look out for the infernal hiss. It’s not as harsh as that, there are some really pretty moments (yes including “The Pretty Song”), but mostly to me this has as much a good sense of humor as it does a sharp sense of balance between chaos and order. A hit from two Misses.”

This entry was posted in Blixter Toad and tagged Fe-mail. Bookmark the permalink.