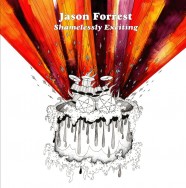 Sonig: “In 2004 Jason Forrest (aka Donna Summer) made heads turn with his third album and first release on Sonig, The Unrelenting Songs of the 1979 Post Disco Crash, a musical rollercoaster ripping through genres like an amphetamine crazed hobo. It received rave reviews from a respected array of international press; a remarkable accomplishment for such an odd and ambitious mix of high-speed disco and breakcore with a 70’s swagger. In addition, Res magazine awarded it’s Clip of the Year to the video for Steppin’ Off (directed by Jon Watts), leading Watts to secure a contract with Fatboy Slim for two further videos and a host of A-list clients. But the question remains — can Jason Forrest top this success with his upcoming release, Shamelessly Exciting? A few beats into the album and you?re left with no doubt — yes, he can and he does it in style! Cascades of pieces taken from virtually every form of rock (progressive/hard/soft/punk/blues) pour down more heavily than in previous releases.”

This is the track I did with Jason:

Available on CD and vinyl.

This entry was posted in Guest appearances and tagged vinyl. Bookmark the permalink.