Fe-mail: An Interview with the Pink Inferno

Fe-mail is Maja Solveig Kjelstrup Ratkje and Hild Sofie Tafjord, and they make noise… lots of it, using theremins, dictaphones, samplers, laptops, harmonicas, and, most importantly, voice (Maja’s) and French Horn (Hild’s). Inspired by the extreme noise music produced in Japan and the vibrant scene in their native Norway, Fe-mail emerged as a more abrasive offshoot of the playfully anarchic improv quartet SPUNK, while Maja and Hild were on tour in Japan in 2000. In the five years since Fe-mail’s inception, Maja and Hild have unleashed a bracing torrent of sound in both the studio and live performance, while still retaining the ebullient, playful character of their work in SPUNK. Of course, you would expect no less from a duo whose first record (released on pink vinyl, no less!) was called Syklubb fra Haelvete, which translates as Sewing Circle from Hell.

I interviewed Fe-mail via email just before they set off for a brief tour of the U.S., which will bring them (for the first time!) to the fair shores of Boston. I addressed the questions to Maja, but, happily, they were answered collaboratively by her and Hild. (Exactly who answers what is not always clear.)

How did you and Hild meet and begin working together? What eventually led to the formation of Fe-mail? What do you find most interesting about the collaboration? 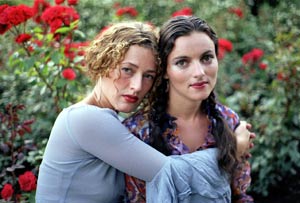 We met at the age of 19 at a pre-school for music in 1993. We actually started out in a jazz band together. In 1995 SPUNK was formed. The four of us wanted to develop a group that related to improvisation as free, playful and undogmatic as possible. Exploring and refining a language based on our individuality, but with a strong group sound. Working deeply with ways of communicating that would expand our abilities as improvisers and musical beings. When we started to work with electronics, the need for taking this to another extreme came along. SPUNK is more acoustic based, whereas Fe-mail is more electronic. Although the last years we have used a broader range also as a duo, sometimes playing purely acoustic, especially in Agrare with Lotta Melin.

The special thing about Fe-mail lies in the communication, the instrumentation, and the way we deal with noise music. Our way of thinking music is coming from physical playing, our main instruments being french horn and voice. And we work a lot with our music in the studio besides doing concerts. We work as composers as well, making music for films, installations, cd format, etc. And Fe-mail brings with it the SPUNK attitude, that anything can be used as long as we like it. We know each other very well, and it’s so valuable to meet a musician on stage and in the studio that reads each other so quickly and precisely, developing still a stronger and deeper communication.

I know far more about your background and solo work than Hild’s. Could you tell me a bit about Hild’s other projects and her musical background?

Hild comes from jazz and rock, and is the first French horn player in Norway to study jazz music, playing avant-garde jazz and free improvised music. Currently she is working with Paal Nilssen Love and Lasse Marhaug, producing their next record, Slinger (Lisa Dillan and Lene Grenager), Unni Løvlid, Håkon Kornstad (Wibutee), she has been touring with Fred Frith, and recent years she has started doing solo concerts. She is also working with children and students in the field of improvising and composing.

How did two traditionally trained musicians like yourselves become interested in noise? Are there any performers who particularly influenced you? 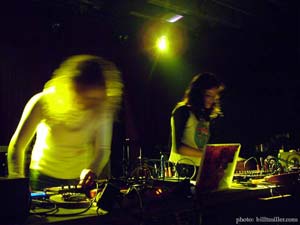 The energy and physicality of noise music immediately came through as something vibrant and important. Our common experience was in Japan, meeting noise music in its pure form in small clubs in Tokyo. This is also where we performed our first noise gig as a duo, but we didn’t have the name Fe-mail yet then. When we came home to Norway we realised that we had formed a duo that would relate to this music. We had a concert in Oslo that was a blowout that lasted 12 minutes, and we were happy and exhausted! Jazzkammer have been influential godfathers, and Merzbow of course. Purifying, challenging and wonderful music. It does not matter if you are trained here or there or not at all. The point is to use what you know in a way that is right for you.

Do you perceive your work as noise musicians as radically different from your other musical activities or is it more of an extension of those activities?

What is the core of all the activities? Perhaps all activities can be looked upon as extensions, the core being an undefined goal beyond reach, something to work with and against with an amount of friction and struggle that pushes your limits and ideas further. The attitude and way of thinking is probably the same no matter what kind of music we make, to explore and let the music live and develop on its terms. Noise music has density and loudness as important factors, while other settings have much more open structures; quiet, more dynamic perhaps. It’s an important relationship between the extremes. They are opposites but not strangers. Our individual languages have a core, flexible to a certain extent, allowed to change and stretch in different settings, expressing different areas of our musical identities. It’s also different to work solo and to work together with someone. The music is coloured by that exact collaboration.

Is Fe-mail’s music always improvised or are there compositional elements? In this sense are your working methods very different in the studio than in live performance?

Concerts are always improvised. We don’t make plans or decide on forms. It happens naturally, and it’s always a great creative challenge and pleasure. The music always has that improvised quality to a degree, even when making music for theater or dance performances which are not improvised. We can relate to large forms or limits in material on occasions like this. In the studio we structure improvisations or compose with bits and pieces of our material. The cd format is something very different from doing a live gig, and has to be considered as that. Some things are pretty composed, others we leave as it was played. The total length of a release is like one large form or composition with parts that need to belong together and make sense. We work together or separately, taking turns on a piece.

I am curious about your ongoing collaboration with the dancer Lotta Melin as Agrare, which I know only through the description on the Fe-Mail website. Could you talk a bit about the nature and history of your work together?

Lotta has collaborated more with musicians than most dancers and doing a lot of audiovisual performances (die audiogruppe and others). Hild met Lotta in Sweden and talked about Fe-mail and our work with sound and movement. We did a performance in Fylkingen in Stockholm with SPUNK and Lotta as a guest, and then we wanted to work with interactive sound together with Lotta, and she invited Fe-mail to join her for a concert later, and then Agrare was formed.

As Fe-Mail, you play a lot with expectations and stereotypes about about femininity. Could you talk a bit about that?

It’s difficult to be explicit on why this is. It’s not a feminist stand in the first place. The music is the focus. On one hand this “playing” with stereotypes has revealed itself exactly thorough playfulness. Besides it’s a bit fun to do it since the scene is so dominated by men. (Nobody is truly strereotypes, as women or men. We are all complex beings, and we dont have a problem with this…) Sometimes we dress in black, sometimes in flowery things…. The improvising attitude is also reflected in this. The week we took pictures for Syklubb, that’s how we looked at the time… and the pictures were not being made for the album, we didn’t know we needed them for that when we did it. That’s always how it happens with press pictures of us: we take pictures once in a while when photographer friends invite us to use some of their pictures and we later ask permission to use them for something. We have never hired a photographer or taken the initiative to take photos. We could choose to give out cds with black covers, but the contrast is more interesting. Besides there are so few noise artists who give their releases a person and a face to relate to. About being feminists: the best feministic contribution we can give is to do what we do as good as possible, making high quality music and playing concerts with no compromises. To show that this is just as natural to do as a woman, if it’s in your heart to do so.

What projects, recordings, etc. do you currently have in the works? I understand you have a new album coming out very soon..

Last March-April, we spent a month in San Francisco at the Asphodel studio, making a cd and dvd (with different video artists). This is a big release for us, and we are looking forward to February when it comes out. We also have a smaller release on Seattle’s Psychform Records called Voluptuous Vultures, it will be released for this tour! Special metalbox edition! After touring the States from 3-21 of September, we go to France with SPUNK afterwards. We are planning release tours in Norway and Europe next year for Fe-mail. SPUNK has a 10 year anniversary in November and will have a small festival!

This entry was posted in Interviews in English and tagged Fe-mail. Bookmark the permalink.