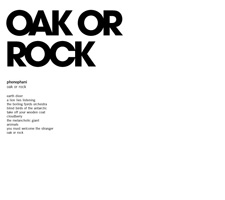 Rune Grammofon: “This is the third Phonophani album, the second for Rune Grammofon. The title refers to mysterious connections between material things, and the album is all about rediscovering the great mystery of music. Through dissecting the sound of ordinary or “real” instruments such as cello, vibraphone, guitars and the human voice and dissolving melodies into their elementary particles, Espen Sommer Eide seeks to excavate the “ur” music itself. Instruments are often sampled and manipulated using software designed and made by himself, being a keen programmer who prefers this to the so-called industry standards, giving the album a personal and unique sound. Maja Ratkje is appearing on one of the tracks.”

Foxy Digitalis: “(…)Maja Ratkje’s voice is what I would imagine a banshee to sound like: eerie, incomprehensible, and something you don’t easily forget. She even shrieks shrilly a few times. Is she singing in a language I’ve never heard, or in nonsense syllables, or is it backward? What is she singing about? Why? Is she sad or excited? Is it even possible to confine her singing to a single emotional category? “Cloudberry” is like seeing a forlorn woman in a train station and wishing that you could help. Hesitating because of uncertainty about her situation and losing the chance, you become plagued by the memory and the idea that you could have done something.(…)” Eden Hemming Rose
Pitchfork: “The best track on the record is “Cloudberry”, a collaboration with vocalist Maja Ratkje. She’s a natural for this sort of between-the-spaces world, sounding like a bionic Meredith Monk floating above the rhythmic bed of static. Her chirps, coos, and melodic croons blend easily with the electronic tones and it’s sometimes difficult to tell where her voice leaves off and the processing begins.” Mark Richardson

This entry was posted in Guest appearances. Bookmark the permalink.