Night one of the Northwest Passage festival 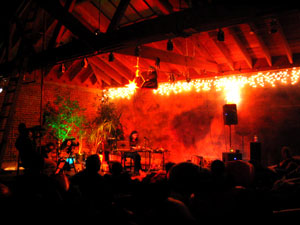 I was lucky enough to see Maja Ratkje and Arve Henriksen of the Rune Grammofon label perform on the third day of November, a cool Wednesday night. Their performance took place in a small loft furnished with cozy mats, bean-bag chairs, and warm lighting. The building was graciously hosted by its residents: a field recording artist who goes by the moniker “Quiet American,” and his wife (who is evidently a fan of cello tape loops). I’m still feeling sort of speechless — to describe the music would be an exercise in futility. It was absolutely amazing.

Arve (also a member of Supersilent) came first, and I quickly realized that improvisational music in a live setting has the potential to be more exciting than anything else. He started with a delicate but impassioned piece mostly centered around his trumpet and his voice, and then segued into a (pleasantly) surprisingly brutal collage of (“Japanese (noise) inspired”) electronically manipulated loops and screams. There were more subtle moments later, in which he would respond to his environment — honking cars outside were mimicked by his trumpet, and he then encouraged everyone to join him by humming, clicking, stomping along — improvising… After a while, the violence came back again, reflecting his obvious frustration with the current political events: “Four more years!! Four more years!! I can’t take any more, you motherfucker!!” This was not what I expected from him, after listening to his solo albums — Sakuteiki and this year’s Chiaroscuro — and that made it all the more thrilling.

Maja (also a member of Spunk) started out by combining her own voice with pre-recorded vocal samples in a hand-held tape player, looping and layering them in various patterns, and applying extra color and texture (and immense, throbbing basslines) with her laptop. She was intense, focused, and totally dominating. I laughed when she paused between improvisations to say, “If it gets too loud for you … cover your ears.” I wouldn’t have dared, even if my eardrums had threatened to disintegrate. There was only one extended moment of relative serenity: when she performed a rendition of a poem by Bertolt Brecht (“The Drowned Girl”) accompanied by an audio-converted recording of particles from the northern lights entering the atmosphere. Mesmerizing. I doubt that anyone has ever looked so elegant waving her hands around a theremin. She’s a gorgeous woman — a pleasure to watch, and the sound she creates is harshly, viciously beautiful. It was almost overwhelming. I loved every second of it.

And then the two performed an impromptu duet. For the first time, apparently. They were utterly symbiotic.