Music for Faking reviews (in English and French) 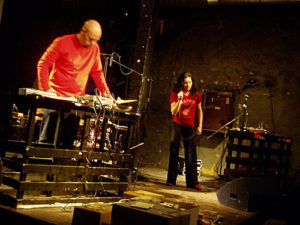 Terrorizer Magazine 2005: “A noise record, the kind often misconceived by fans of melody and tune. Noise releases are amongst the most conceptual forms of music to be thrown into the ether, with diverse artists like Alvin Lucier and Knut Aufermann using scientific experiment in sound and feedback as a black vortex of manipulation. ‘Music For Faking’ is the third instalment from the established Nordic electronic improvisers Maja SK Ratkje and Lasse Marhaug (the latter from the avant garde sound art group The Nordic Miracle) in their ‘Music For…’ series. This effort represents the dynamic duo’s capacity to record a one day live performance in Oslo and set it to record it with 100 per cent raw untouched noise without overdubs. Through amalgamating field recordings, samples, radio interference and processed noises, this release shows the perfect polarity between organic analogue and digitalised abrasion without taking what they do too seriously. Listen to ‘How Much Noise Can We Make? (Let’s Find Out)’ – and discover that, yes, noise can be fun too.” (Will Stone)

Vital Weekly, number 462, week 7: “Following their second CD ‘Music For Loving’ on Bottrop-boy, ‘Music For Faking’ is the third collaborative work between Norway’s noise guru Lasse Marhaug and Norway’s noise girl Maja S.K. Ratkje. The latter of Fe-Mail and Spunk fame and the first of Jazzkammer and solo fame. This album is the result of a day in the studio, with an all frenzy improvisation mood. No overdubs, just a bit of editing. Playing laptops, guitar effect pedals, theremin and god knows what else, the seven tracks are a pisstake at musical culture, at least in the titles of the pieces, such as ‘Nihilist Ace Blues For Time Travel’ or ‘How Much Noise Can Make? (Let’s Find Out)’. They thrown in sounds of popular culture in their blenders, and put the temperature all the way up. So, yes this is full blown noise, for at least 90% of the disc, but the two are capable to produce some noise that really matters. One in which something is happening, a dynamic field of sound, small stuff is enlarged and amplified, like a high pressure cooker. Noise as it should be. A lesson to study for many.”

The Wire, issue 254, 2005: “After their previous Music For Shopping and Music For Loving collaborations, Norwegian noise impresarios Maja SK Ratkje from SPUNK and Lasse Marhaug of Jazzkammer fame return with a third collaboration of incredibly strange sounds and fractured, chaotic sampling. Music For Faking is the equivalent of carelessly tossing a lighted match into an open box of cheap Korean fireworks. It goes off with a bang and sends a series of screaming noise rockets into the air, which plummet back to earth showering sparks and flaming debris. “How much noise can we make? (Let’s find out” is one of the questions asked here, and they answer it with a Godzilla-sized blast of digital demolition that comes down hard and keeps pounding. Elsewhere what sounds like a William S Burroughs voice sample and blaxploitation TV clips are incorporated into the mix of intricately looped beats and crushed instrumentation. Faking it has never sounded so real.” (Edwin Pouncey)

mimaroglu music sales: “ah, lasse & maja… may your hearts never grow cold. somewhat deplorable artwork, but then again lasse’s always had that certain sense of the absurd… a solid afternoon of ruckus-construction transcribed, mastered, laid out, and replicated for further consumption by us, the fans… comes close to the “all men are pigs” session in vociferousness, fans of said should check this out.”

the milkfactory: “They did it once, and it worked brilliantly, so they decided to do it again… and again. Maja Ratkje and Lasse Marhaug, both established avant-gardists, noise terrorists, relentless sonic explorers, are in their own right admired for their respective body of work. Their first documented collaboration, Music For Shopping, released on limited edition vinyl two years ago, saw their worlds collide in majestic effusions of noises. Investigating sonic terrains familiar to both of them, yet meeting somewhere between their respective grounds, this album was a mind opening experience, even for seasoned noise aficionados. Two years on, it is not one but two further collaborations, released in the space of just over six months, which the pair is presenting. The cover of Music For Faking pictures Ratkje and Marhaug sporting full grin, illustrating the playful atmosphere of their collaborations. Although both accomplished and respected musicians, they refuse to take themselves, or their art, seriously, preferring instead to continuously challenge each other into more staggering assemblages. Collecting interferences, field recordings, processed noises, samples, and other sound sources and amalgamating them all, Ratkje and Marhaug confront traditional perceptions of music, firmly placing their work out of context and focussing on the essence of improvised music. This results in both albums being incredibly organic, with sonic textures, ranging from silky analogue waves and highly polished digitalised noises to abrasive distortions, treated vocals – including screams – and radio interferences, continuously provoking cutaneous reactions. The soundscapes of both records constantly fluctuate between sonic assault and delicate restraint, often in a same piece and often without warning. Perhaps not records to put in every hands, these collaborations between two of the most important experimental musicians of their generation are equally as intriguing, challenging and impressive not only by the scale of these records, but also by the sheer joy that transpires from their relationship. Noise can be fun, and Maja Ratkje and Lasse Marhaug prove it again and again.”

PARIS Transatlantic Magazine: “Scavenging through sonic detritus and muck, Ratkje and Marhaug re-establish the authority of noise. Music For Faking might suggest chaos and anarchy, but it’s so well structured and machine-honed that at times it sounds composed, even though it was recorded in real time with no overdubs at Maja’s place. Almost everything is impregnated with distortion, even the “calmer” spots: just listen to the title track, where a deranged treatment of Popol Vuh’s Aguirre becomes the excuse for a chorale of a million creatures from some sort of sonic underworld. In “The sad clown called the law”, amidst a hellish mess of twisted saxophones, telephone signals and television voices, an oblique laugh is looped to create a pattern so absurd that you can’t help laughing too. Once in a while the wreckage is interrupted by short outbursts of easy listening muzak and acoustic guitar arpeggios, but “How much noise can we make? (Let’s find out)” is totally self-explanatory – pump up the volume at your own risk – and the initial riff of “Nihilist ace blues for time travel” begins a journey to the centre of the spin cycle of a demented washing machine full of chattering chipmunks. It’s lively, funny and full of great ideas. I’ll bet Maja’s neighbours loved it too.” (MR)

Tangents: “We see that track four of Maja S.K. Ratkje and Lasse Marhaug’s Music For Faking is called ‘how much noise can we make? (let’s find out)’. The answer, as it turns out, is “quite a bit”; all of it utterly mad and thoroughly in debt to the similarly kind of bonkers Euro Hardcore electronic mayhem that Alec Empire has hurled our way in the past. If the sound of petulant electronics spewing their guts up over a bedrock of white noise is your idea of A Good Time then check this out pronto style. If not, erm, then don’t.” (Alistair Fitchett)

aversionline: “These seven generally long experimental noise tracks are the result of a one-day collaborative effort between these two Norwegian artists, recorded live with no overdubs on July 20, 2004 at Ratkje’s home. As the colorful and lighthearted layout full of oddly collaged imagery would suggest, this is a rather chaotic listen – but not one that’s harsh and acerbic, no, just one that’s got a lot going on, shifting and changing between all sorts of different effects and sampled sounds: Be it piano, rock music, Indian music (or so it seems), jazz, chirping glitches, ethereal ambient hums, beeps, shuffling, breaks of distortion, whispering, or more lighthearted fare. Some tracks make heavier use of layering than others, and at times portions of songs like “Pop Up in Strange Beds With a Smile” can shift quite strongly from sparse textures to rather grating noise that does have a significant edge to it; while “As Real as it Gets: A Psalm for Ultra-Woman” is a little more relaxed and repetitious in its use of loops and only subtly musical undercurrents. The distorted drum solo manipulated at the start of “How Much Noise Can We Make? (Let’s Find Out)” is actually surprisingly effective as well, slowly but surely caving in to a wall of harsh distortion that allows a few more intricate details to seep out into the foreground over the persistently vibrating hum that resonates throughout the entire selection. At barely over a minute “Announcement to All the Graceful Sailors” is by far the shortest track herein, but then it’s back into more than 12 minutes for closer “Music for Faking” – opening with some sort of weird grindcore sample or something that’s been spliced up against comedy samples about cops and chirping electronic sounds. Eventually things lead over to another strange electronic texture against some breakdance beats or whatever. Of course things eventually do end up louder and more distorted, with lots of cutup movement and stuttered shifts in structure, but there are some really spacey ambient passages to be found later in the track as well (for the final several minutes, in fact), so this one’s a little wild in its range of different dynamics that keep popping in and out almost out of nowhere. I’m not sure what more to say about this one. It’s kind of a succinct review for a full-length CD, but the seven tracks, while different from one another in their minor details, are all fairly consistent in general approach. It’s not something I’m totally into because it’s not the kind of noise that tends to focus on atmosphere, but it’s still a release that I can appreciate, and none of these songs are bad. I enjoy some compositions more than others, but most of them have their standout moments. The more laidback and consistent “As Real as it Gets…” works a little better for my tastes than many of the other tracks, but again, nothing here is “bad”. It’s more a matter of personal taste that keeps me from being more enthusiastic about the work.”

This entry was posted in Other album reviews and tagged Marhaug/Ratkje. Bookmark the permalink.