If Norwegian music wants a calendar girl, its admirers could do worse than to contact Maja Solveig Kjelstrup Ratkje, a composer who both writes well and photographs well. 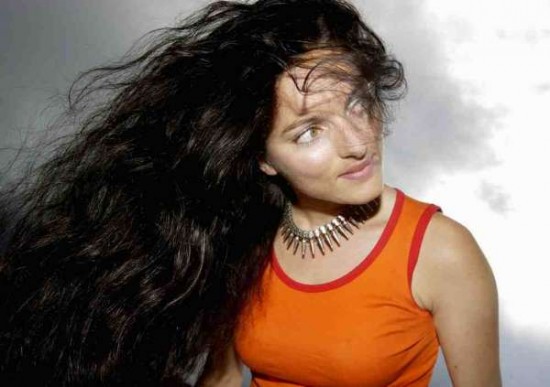 Like Jean Sibelius in Finland and Carl Nielsen in Denmark, Grieg so towered above his national musical landscape that successors are still walking in his shadow.

Not that everyone subscribes to the notion that music waves a flag. The English conductor Sir Thomas Beecham once argued that “there is no such thing as nationality in music. Music is universal. We have northern and southern music if you like. Grieg was northern, not Norwegian.”

Lawrence Cherney would probably subscribe to at least a few of Beecham’s words, if we are to judge from the latest concert to be presented by Soundstreams Canada, Feb.6 at the CBC’s Glenn Gould Studio, in which Maja Ratkje’s music is to be performed alongside that of Canada’s Melissa Hui.

Cherney, a musical traveller in the Nordic countries as well as Soundstreams’ artistic director, has titled the concert “Beauty On The Edge,” alluding to the fact that both composers share a sense of northerness, of coming from countries far from the traditional centres of Western art music.

“At Soundstreams,” he says, “we have an ongoing interest in exploring northerness.” Witness the series of Northern Encounters begun in 1997 and continuing today under the festival umbrella name Musicools.

Cherney finds Nordic composers to be risk-takers and characterizes Norwegians in general as non-conformists, citing their two-time rejection of membership in the European Union.

A visit last year to the well-stocked Norwegian Music Information Centre in Oslo supported his generalization. Examining the stacks of scores and recordings with the centre’s director, Morten Walderhaug, I was struck by the quantity and variety of music produced by a country with a population of only about 4.5 million people.

“I think young composers in Norway are performing more than they once did,” Walderhaug suggested, “so they are in closer contact with musical practice. They don’t feel threatened by pop and jazz. They regard the whole palette of musical colours as a toolbox. And this is all bringing them closer to the audience.”

The example of Ratkje provides a case in point. Rather than isolate herself in a studio, she has become an active participant in the concert life of Norway, as a singer, whistler, electronics and theremin player as well as a studio engineer and music producer. In Toronto, she will be performing her own music in the company of her accordion-playing spouse, Frode Haltli.

As an indication of her catholicity, consider the titles of some of her compositions Punkhouse Conversation for electronics/noise, Gagaku Variations for accordion and string quartet, Sinus Seduction for tenor sax, reverb and quadraphonic tape and I Hate Cars (Super Chicken Floppy Willy In A PPP Swimsuit, an electronic remix of the group Jazzkammer.

“The new music in Norway is not just about greater simplicity,” says Walderhaug. “It is about expression. A wish to communicate is the new thing.”

The “old thing” is challenging music in the traditional European avant-garde manner, composed by the towering likes of Arne Nordheim, a handsome seven-CD boxed set of whose music appeared on the Aurora label in 2001 to mark his 70th birthday.

Nordheim has visited Toronto under the auspices of New Music Concerts and still enjoys the reputation of being a “daring sound experimentalist” and a “leading figure in European music,” as the Aurora album notes indicate.

In honour of his work the Norwegian Ministry of Culture and Church Affairs established in 2001 the Arne Nordheim Prize, to be awarded annually to a composer living in Norway. Its first recipient? Maja Ratkje.

Morten Walderhaug points out that in Norway today, younger audiences are willing to accept a mixture of the traditional and the new, citing the way the Risor Chamber Music festival successfully programs even Schubert with contemporary music.

The country’s five leading professional orchestras are about to put this openness to the test in the 2004-05 season. Since 2005 marks the 100th anniversary of Norwegian independence, they will be celebrating 100 years of Norwegian music, involving the performance of 20 orchestral scores to be broadcast across the country.

“It is a country’s obligation to test and re-test its own musical traditions,” he says. “We hope some of these works will be rediscoveries. Most Norwegians know only one composer of contemporary music, Arne Nordheim.”

Many other composers are, of course, available on CD. A Sony album by the violinist Arve Tellefsen and the Oslo Philharmonic features music of Fartein Valen, one of the late Glenn Gould’s favourite 20th-century composers. Rolf Wallin, who visited Toronto in 2001 under Soundstreams auspices, can be found represented on the Hemera label, Lasse Thoresen and Finn Mortensen on Aurora, and at least four CDs of Geirr Tveitt’s orchestral music are played by the Royal Scottish National Orchestra on Naxos. 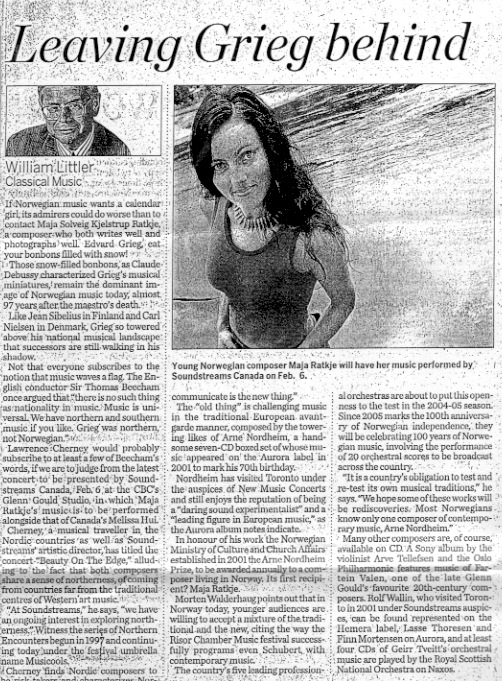