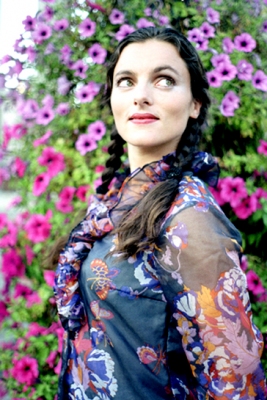 She is described as the Norwegian music’s “enfant terrible”, Maja Solveig Kjelstrup Ratkje. Such a label opens door, and she is soon to be found at Radio France’s music festival Présences 2004. MIC and Nordic Sounds present a profile of the woman making all that noise.

It was about ten years ago, as she sat in a library with Karlheinz Stockhausen’s Gesang der Jünglinge sounding in the headphones, that she started to realize the course she should take. Since then an incredible amount has happened. Maja Solveig Kjelstrup Ratkje, 29 years old, composer and improvisation musician, singer, whistler, laptop manipulator, producer and a kind of art music Jill-of all-trades; she is a sound artist in the widest sense. But the route she took there wasn’t poker-straight, although Maja Ratkje says that she was always making music.

It began with the violin at the age of 4-5, then piano, song and “various electronics” as she herself puts it a little sweepingly. A musical family? Well, not really, although Ratkje’s grandfather was active as a violinist in a symphony orchestra – at the same time as he had a career as a boxer! (Oh yes, one suspects that her grandfather is worth a story all his own.) Both composition and improvisation were also part of the picture early in Ratkje’s life, from the age of 7-8, but still without her ever thinking of a future as a composer or musician.

And that is also why, originally enough, she had no real musical education in her baggage when she started at the Norwegian Academy of Music in Oslo in 1995.

In fact it was only a short while before this, when she met Hild Sofie Tafjord – one of the four members of SPUNK – at a ‘folk high school’ that Maja Ratkje finally decided to focus on music.

A crooked path to the music college and – perhaps some would say – an odd spell there and a rickety departure from it. For it is by no means easy to get a grip on who and what Maja Ratkje is amidst this diversity. She says herself that she encountered a certain scepticism at the academy, where she could never see the boundary between composing in the traditional sense and improvising concerts. “It never struck me, not even when I was studying composition, that I should limit myself to just writing music.” The improvisation group SPUNK soon became a refuge where found an outlet for her urge to “create in the moment” for herself.

From Japanes culture to Fe-mail

Her activities now range over widely differing areas and reflect an unusual musical breadth: she moves effortless from the traditional concert halls with pieces like the prizewinning “Waves IIb” or “Gagaku variations”, which reflect her great interest in Japanese culture, to club environments where she is one half of the noise music duo Fe-mail. The contemporary music world and the noise world are both a kind of subculture, but it is still rare for them to meet as they do in Ratkje. Her preoccupation with “sound” – sound for its own sake, rather than aesthetic principles in a more academic sense – makes her own listening and creating unusually all-embracing.

Almost involuntarily, Maja Ratkje thus seems today to stand for the boundary-shifting ambitions of a new generation. Suddenly she has become the poster girl of young Norwegian contemporary music. She who has openly criticized the cult of the individual and the hunger for celebrity has been assigned a kind of symbolic role. Is there a conflict here between the artist’s will towards communication and the media’s need for and consumption of ‘the Face’?

No, says Maja Ratkje herself, not as long as the focus is on what one does instead of the private individual.

“And in fact I think that creative artists have a duty to try to talk about and explain what we are doing.” But she concedes that it requires a delicate balance between on the one hand giving new music a face and on the other escaping the demands for exposure of one’s private life that we can see in popular culture.

“When Norwegian TV made a documentary about me a couple of years ago, I really experienced the importance of setting limits to what is relevant for me as a professional and what is far too private. But if I can make a contribution to increasing interest in new music through being part of such contexts, then I don’t see any reason not to. But I want to do it on my own terms.”

Perhaps it’s typical of her view of publicity that she is particularly proud of SPUNK, which is not a manifestation of her own creativity alone but of a whole group’s. With the collective SPUNK her creativity was released at a certain point, and with SPUNK at the forefront her various areas of activity now seem to be coming together gradually. She herself feels there are closer linkages, or least that differences between composition and improvisation, for example are becoming increasingly irrelevant as far as she is concerned. “At any rate, it’s my own aesthetic sense that is behind the musical choices in both cases.”

The opera that was premiered during the Ultima Festival in Oslo last autumn, No title performance and sparkling water, was an example. The ensemble SPUNK formed part – as stage actors too – of a kind of open, freely associating music drama with singers, actors, video art and unexpected musical shifts. Her first solo album, Voice, is another example: “When I was working on Voice I started with lots of different improvised voice recordings that were later manipulated. On the basis of that I composed, edited and put together a CD with my own voice as the sound-source. I see the disc as a single work with smaller movements that take issue with various situations on the basis of my voice.”

Maja Ratkje mixes formats and styles as she likes. The result can be carefully planned music as well as combinations of the sounds, accidental noises and ideas provided by the whim of the moment. And on Voice it isn’t only the voice that is heard: the twiddling and clicking of the recording equipment becomes part of the whole. It becomes a kind of sound diary. She doesn’t care for fixed routines. The challenge lies in trying out new paths. Surrealistic? If you like. Irrational? Why not? Her musical adventurousness may be a consequence of restlessness, or maybe it can be seen as a way of fighting off melancholy, in some way keeping the child’s curiosity about the world without becoming naive. She mentions Astrid Lindgren’s firecrackerish, free-thinking children’s book heroine Pippi Longstocking as one of her models.

“Pippi Longstocking sleeps with her feet on the pillow. I try to turn certain conventions on their heads. But most of all it’s about not taking everything for granted, about always being open to different solutions as long as it’s fair. Pippi is anarchistic and boundless in her ideas, but also has a great sense of fairness and justice. That’s a fine model.”

Tony Lundman is a Freelance writer and music critic on Svenska Dagbladet. The article has appeared in Nordic Sounds’ December 2003 issue.

Latest album with the quartet SPUNK. The title, meaning “The very top of a blue-painted flagpole” was taken from Astrid Lindgren’s Pippi Longstocking (as was the title of SPUNK’s debut album mentioned here).

SPUNK’s debut album. The title means “All I know is it isn’t a vacuum cleaner”. “Improvisation from four young female musicians with backgrounds in jazz, classical, contemporary, rock and country. Beyond categorization.”