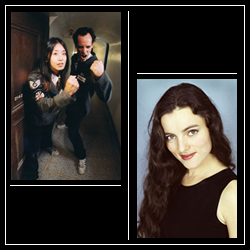 Every Friday, Dusted Magazine publishes a series of music-related lists determined by our favorite artists. This week: 25 Suaves and Maja Solveig Kjelstrup Ratkje.

Norwegian singer, improviser, and composer Maja Ratkje has worked with such artists as Merzbow, Jazzkammer and Otomo Yoshihide. She plays electronics with the free improv group Spunk and has also worked with leading improvisers like Evan Parker, Rhodri Davies and Gino Robair. Ratkje’s most recent projects include Syklubb fra Hælvete by the noisy Spunk offshoot Fe-Mail, and Voice, a new solo CD on the Rune Grammofon label that finds her experimenting with processed vocal sounds.

This is a list of some great albums in random order, impossible to compare since they cover a wide range of styles, and represent some of my sources of inspiration that for most people don’t make any sense at all. But there is a logic somewhere, an urge to some unexplainable honesty and directness that I feel is coming through in all these recordings. Still, if you asked me to do this again in a week or two, the list would probably look quite different!

1. Sainte-Colombe – Concerts a Deux Violes Esgales (Alice Musik Produktion, 1996) Leif Henrikson and Mogens Rasmussen – viola da gamba. – Sainte-Colombe is a mysterious person in French music history. There is no record of his dates of birth or death, but it is likely to be sometime from 1600-1700. His first name is also a secret for us, and the pieces recorded on this cd are, with two minor exceptions, his (or hers?!!) only surviving work. The bass instrument in the viola da gamba family has seven strings made of real intestines, it is tuned like a guitar (its origin is said to come from a guitar that once was bowed), and has an airy spherical sound from the deep register to the high, all straight notes (no horrible classical vibrato here!). The harmonies developed along with the horizontal, melodic lines take you on a ride to something esoteric but infinite. There is so much peace in this recording!

2. Håkon Austbø – O. Messiaen: Vingt Regards sur l’Enfant-Jésus (Naxos, 1994) – This Norwegian pianist is dedicated to playing the music of Messiaen, and he even worked closely with this legendary composer. This double album for solo piano is one long composition split in smaller movements, a wonderful sense of duality and feeling for form keeps your attention. Messiaen’s skills as an improvisor shines through the strongly structured music and makes the music very present and alive! (The composer as an improvising musician is a lacking role today.) While still alive (but unfortunately before I was able to travel on my own) Messiaen improvised regularly at the organ during his church services in La Trinité in Paris for the mass every Saturday. He is a Bach of our time, but his religious disposition is however almost frightening!

3. Naked City (John Zorn) – Grand Guignol (Avant, 1991) – Bringing in Yamatsuka/Yamataka Eye, Zorn’s Naked City ensemble became the best speed-jazz-punk-improv ensemble ever! (Perhaps only beat by Otomo Yoshihide’s group Ground Zero later on.) This recording is a definite tribute to the darker sides of humanity, referring to a Paris movement at the turn of the last century (hundred years ago). The album opens with the title track, closes with 33 miniatures from an older issue, and in the middle you find seven re-instrumentations of Debussy, Scriabin, di Lasso, Ives -and Messian. The latter, a beautiful, crystal clear performance with the melody from the fifth movement of ‘Quator Pour le Fin du Temps’ played on a moog. This album is very romantic!

4. Giacinto Scelsi – Quattro Pezzi per orchestra, Anahit, Uaxuctum (Accord, 1989) – This album is one in a series of Scelsi’s music on Accord, representing his most expressive and at the same time inward dive into a world of microtonal writing from the mid 50s to mid 60s. ‘Quattro Pezzi’ is a four movement piece, each meditating around one central pitch. ‘Anahit’ is the most beautiful “violin concerto” ever written, a gliding sensation upwards with chamber orchestra and a microtonal violin totally free from virtuoso clichés ending in cadenza and a coda which lifts the music to a higher reality. The subtitle is “Lyric Poem dedicated to Venus” and ‘Anahit’ is the ancient Egyptian name for Venus, as well as being the name of the main female deity in ancient Asia Minor. Who cares that later discovery discredits the composer because his assistant was helping him writing down the notes. It’s the music that counts!

8. Togi Hideki – Gagaku (Heaven, Earth and Sky) (EMI Toshiba, 2000) – Gagaku music is Japanese court music, unchanged over more than thousand years. This is a professional ensemble playing the gagaku “standards” on traditional instruments. I got this cd from a dancer in Tokyo, and nothing in the beautiful cardboard cover is translated to English, I got the title and the name of the ensemble leader translated. This music is slow, strange, powerful and “very disharmonic for western ears”, it totally fits my requirements for good music. The instruments are the wind instruments ryuteki and hichiriki, the string instruments shamisen and koto, different percussion instruments and the mouth organ into which you produce sound through circular breathing, the sho.

9. The Golden Palominos – Dead Inside (Restless, 1996) -Very dark even though the music’s surface is more “easy listening” than most of the other music in this list. Electronics and poetry draws the listener into a surrealistic house with each song representing a different room, in my mind, for some reason, very much related to another favourite of mine, Michael Ende’s collection of stories in the novel, Mirror in the Mirror.

10. Clara Rockmore – The Art of the Theremin (Delos, 1987) – Clara is the master of the theremin! On this album she plays the instrument with her sister accompanying on piano compositions we know from the classical vocal and strings repertoire. It sounds like a mixture of a mad soprano who doesn’t breathe and someone playing the musical saw. It’s totally absurd! (The theremin is an analogue instrument made in the late 20s by the Russian with the same name. You produce sound by moving in the air against two antennas, controlling the volume and pitch.)

This entry was posted in by Maja in English. Bookmark the permalink.