Edited from an interview with the Greek zine Strange In Stereo

From what I have read you started off academic studies in music composition at the university and then went on to improvising. Is that true? What inner need led you that radical change?

It’s not a dramatic change. It’s something that has been there all the time, and the education I got as a composer was very open minded. You are supposed to already know how to make Bach chorals when you begin studying composition, so it’s all about how you find your own aesthetics. I must admit I have felt kind of different compared to my colleagues who by comparison generally have a heavy classical background as a point of departure for their compositional work.

I decided to become a composer in 93/94. I was just finished with gymnasium where I studied science and maths. I really wasn’t planning to make a living from music. But fortunately I took a year at a folk high school to enjoy my greatest hobby (music); a whole year before continuing, as the plan was, to go on in a scientific direction. But something happened to me that year, I found it so much more meaningful to work with music, even though at that time I didn’t have any formal training, and I must have been a really lousy composer and musician. So instead of going the safe way of studying physical science as the plan was, I moved to Oslo to study music. I entered the Music Academy after one year, to study composition formally for a further five years. In the meantime I found out that it was necessary to keep up with my playing, and luckily I found people around who were interested in doing free improvisation. I have never been a typical desktop composer, and today I see no contradiction doing both improvised and composed work. Actually, it’s starting to interfere more and more .

You take part in many projects, write a lot of scores, you play with free improvising groups like Spunk or the female electronic duo Fe-mail, your solo work etc. Which parts of your personality or ideas do you express with each one? What do you think remains the same and links these projects? 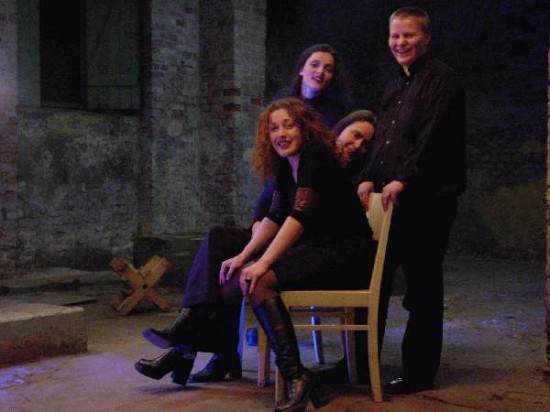 I used to think it was necessary to find a more limited form through which to express myself , like narrowing in all these, on the surface, very different projects or activities. Today I see it as a whole. Every part of my work belongs together in a multi-layered network of meanings in my own mind. It’s very difficult to point out what belongs to what, and I don’t see the reason to do it either. More and more I have started to combine the different experiences I have as a performer and composer into something new; a way of making music which is not yet defined within any specific category. The first real documentation for this way of mixing structural ideas and free form improvisational/conceptual ideas is my solo album Voice. It’s a record that means a lot to me, because I finally feel that I have been able to bring more and more sides of myself into one work. Among the compositions I’ve written for other musicians to perform, there are pieces which are more important to me than others: “gagaku variations”, “Waves IIb” and “Sinus Seduction” are the ones that sort of sums up my ideas as a composer, ones where you let your own intention as a musician influence the work, but without participating as a musician yourself. The choices I do as a “strict” composer on the one hand and an anarchistic improviser on the other hand will however always reflect the same aesthetics, the fundamental ideas are always the same. This is perhaps a key to a deeper understanding of my music; that it belongs together even though it varies on the surface and in conception from time to time. After ten years of composing and playing as a main focus in my life, I’m more certain that ever that it all belongs together.

On Voice there are equal pieces of joy playfulness, anger and mystery. Did you try to express a whole range of your feelings in the music? Do you think one-dimensional music (like only angry music, only sentimental music, only melancholic music, only happy music etc.) is limiting and depressing for the artist, who is then trapped in a “concept”? Do you think that happens even in intentional free improvisation?

I don’t think about emotions when I perform. The associations you get when listening to it afterwards obviously connect to certain emotions, but that is happening in the listener. I try to leave open as much ambiguity as possible in my work because I don’t want to force my own emotions on other people. You may say this sounds strange according to what you hear on the album, but really, to be able to say something at all musically, on a deeper level of consciousness, you must avoid the one-dimensional, the obvious, the story-telling business that you find in most of the commercial music. I have to emphasise this again: All the sounds I make with my voice on the album are musically intended, not emotionally. It’s up to the listened to find his or her own “story” or connection to what I do, and I really hope that people do that; the worst reaction ever is indifference. I’d rather have people get angry with me (and that happens a lot too!).

The term ‘free improvisation’ is a misleading term because you always reflect on the experience you have. The most exciting thing about improvising without any rules (as we tend to do in SPUNK) is that new constellations occurs, between ourselves and within each of us. When doing solo improvisation you are in a dialogue with your own aesthetics, your own experiences, and these are always an unlimited source of inspiration as long as you are in touch with your surroundings and in search for something more.

You use your voice also in SPUNK. Is there a different approach in the way you deal with it there?

In SPUNK there is no plan or approach at all except to play with whatever instruments we find useful at any given moment. And voice is my main instrument, in the same way as the other musician’s have trumpet, horn and cello as theirs. The other instruments we use besides that are changing all the time. Right now we mix in quite a lot of live electronics as well, as you may hear on the last record, which really is improvised simultaneously (no plan!) in real time and without much editing or post production. Anarchy in improvisation is necessary, and as much openness as possible, but it doesn’t mean that you have to go to the limits of your register of expression ALL the time.

Recently, lots of artist are doing voice-manipulation with electronics. Do you think that changes the way we perceive human voice?

Ever since the early days of making electronic music, the human voice has been central as a sound source. Stockhausen composed “Gesang der Junglinge” in 1956. Luciano Berio made a piece called “Thema: Omaggio a Joyce” in 1958 were he used analogue tape cutting technique with voice recordings of Cathy Berberian reading from Joyce’s “Ulysses”. The Norwegian composer Arne Nordheim worked a lot with voice recordings in his very important electronic works done in the sixties. The electronic equipment we have today is so flexible and with all the software available you can make anything sound like whatever, so the idea of using only one sound source is more on a conceptual level rather than a limitation for expression. I think the situation is very generative and opens the way for a lot of creative possibilites regarding how to make original music. But the drawback is also that it becomes too easy to achieve soundscapes that once would have taken months or years to create with analogue tape and scissors! You have to find other limits and frames for your expression in order to have something to measure yourself against. It’s necessary with some frames to avoid the music becomes grey and indifferent.

SPUNK and Fe-maile are female groups in music genres that are dominated by men. What new elements do you think you can bring?

I have no idea! It’s not possible to say anything in general about the female contribution in this field since we are so few doing it. I think however the individual differences between artists (not concerning gender) will always be bigger than the difference between music made from males or females (if it were possible to say things in general, but since it isn’t then we won’t know).

You have collaborated with literally hundreds of people. Which of them you think had the most profound influence on your musical progress?

SPUNK is the collective I will always come back to. We have worked continuously since 1995 and we share a recording studio in a basement in Oslo. Hild (from SPUNK) and I started Fe-mail in 2000, but we have played together for 10 years now. We started out in a jazz band (I sang and played piano, Hild played horn and sang too), and it has developed a lot I must say since then! Lately the collaboration with Jazzkammer has meant a lot to me. We are also playing together now, as an extended version of the Voice concept which also includes a video artist, HC Gilje. We did a concert with this in Linz at Ars Electronica recently and it was very exciting. The Dutch vocal performer Jaap Blonk has also inspired me a lot when it comes to what I can do with my voice. He has been in this field for 25 years and I really enjoy “singing” with him. We have a record coming up as well.

In the last five years the Norwegian music scene has shown some of the best radical, experimental music in Europe. Why you think that happens? What led to the big-bang of the scene?

It’s not easy to find a specific reason for this, but it’s been happening a lot in the field where composers and performers with different backgrounds are mixing both socially and collaborating, so a lot of new music emerges from this that hasn’t yet been possible to “label”. The younger generation of musicians don’t care much about background and what kind of education you’ve got, it’s a general search for quality that makes people work together and we have some forums in which to express our music as well, like rune grammofon, smalltown supersound, SOFA, and the venue BLÅ in Oslo.

This entry was posted in by Maja in English, Interviews in English. Bookmark the permalink.