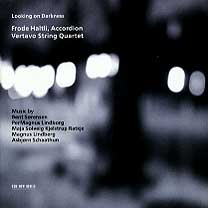 ECM: “This is the solo recording debut of accordionist Frode Haltli, a major talent from Norway, destined to make his mark on several genres. He was last heard on ECM in the company of Trygve Seim and friends, but his primary commitment is to the performance contemporary composition and this album features Nordic new music – from Norway, Sweden, Denmark and Finland – written for the accordion. Four of the five pieces are premiere recordings, with three written especially for Halti. They add up to a fascinating landscape of new music from the north, music which casts its inspirational net wide. Features compositions by Bent Sørensen, Asbjørn Schaathun, Magnus Lindberg, PerMagnus Lindborg, and Maja Solveig Kjelstrup Ratkje. Halti is joined by the Vertavo Quartet for Ratkje’s “Gagaku Variations”.” Frode Haltli received the Norwegian Grammy for this album!

This entry was posted in Recorded compositions. Bookmark the permalink.